An important game of the coming round of A-League will be played between Melbourne City and Macarthur FC in AAMI Park, Melbourne. The hosts look to continue their momentum of four undefeated games while the guests are yet to win in the last two games.

The recent away games of Macarthur have been a difficult task for them as they have collected only four points in the last six away attempts. In addition, the Bulls have also played three consecutive away games and have the same challenge again. On the other hand. Melbourne City has won three of the last four games, drawing one. The City also defeated Macarthur in two of the last three H2Hs while remaining unbeaten in all. So for all these reasons, it would be easy for us to predict the victory for the Hearts.

Melbourne City has been involved in many high-scoring totals recently and were also the team to hit more numbers. While Macarthur has also been able to produce an average of two goals per game in the last six outings. The Bulls didn’t have a decent record of scoring against the Heart but based on their recent scoring drift in away games, we can expect this game to cross the total of 2.5 goals. Macarthur scored eight goals in the last five away outings.

Melbourne City vs Macarthur: Check out the best odds and the latest stats

Melbourne City vs Macarthur: Check out the team lineups

The City couldn’t keep their lead and drew their last game against Perth Glory by leaking a goal in the early second half. But the team has recorded the second most number of wins,  8 so far out of the total 16 games, and stay at the second position. The City boss Patrick Kisnorbo owns a fully healthy squad for the coming game.

The Bulls have dropped five points in their last two games but still hold the third position in the standings with the difference of seven points and two games in hand from the second. Macarthur lost their last game by 3-1 during their trip to Melbourne Victory. The club manager Ante Milicic has no fitness concerns in the team before this game.

Questions About Melbourne City vs Macarthur 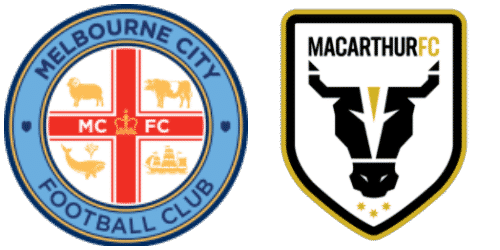 Where is the game being played? AAMI Park (Melbourne).