Adelaide United will be looking to stay on the winning track when they host Brisbane Roar in the coming fixture of the A-League. The Roar will be disappointed to lose five points in the last two games.

Adelaide United had consecutive winless games in the ending games of March but has secured the momentum of three wins in a row ahead of this game. On the other hand, Brisbane Roar are opposite to their host that are yet to win in the previous four games. The Roar also concluded the last meeting with a defeat. The Reds also have been a difficult test for the Brisbane Roar in all of the recent hosting H2Hs, winning all of the previous four. So a victory for Adelaide United seems visible in this meeting.

Adelaide United have missed the target only once in all of the home games of 2022 while Brisbane Roar also failed to score in one of the last two away games. Nevertheless, the Reds’ front line managed to score in all of the recent hosting H2H, getting two clean sheets in the last two. Adelaide United have also conceded zero goals in the last two home attempts of the league. So we believe to see this game without a BTTS outcome at the end.

Adelaide United vs Brisbane Roar: Check out the best odds and the latest stats

Adelaide United vs Brisbane Roar: Check out the team lineups

The Reds defeated the bottom side, Perth Glory in the last game with a final score of 2-0 at home. Following the two victories and seven draws in the 24 outings of the campaign, Adelaide United are fourth in the points table. Nick Ansell will not be able to make an appearance in this game because of an Achilles tendon rupture.

The Roar played their third draw of the last four games in the previous duel against Melbourne Victory. Brisbane Roar has confirmed only six wins in the 23 attempts and lost 12, standing at the second to the last in the standings. Connor Chapman will be out of the game due to injury issues. 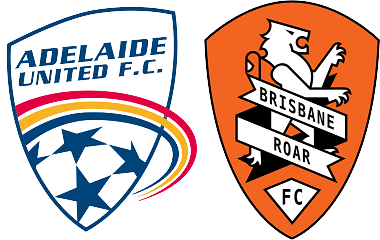 Who won the last h2h? 1-3 in favour of Adelaide United.