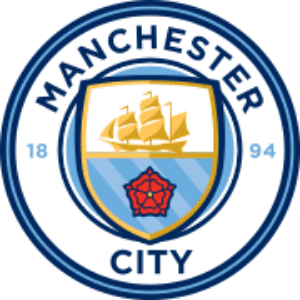 Manchester City FC are an English Premier League football team that are owned by Sheikh Mansour’s City Football Group. CFG also own New York City FC and Melbourne City FC. The club was founded in 1880 as St. Mark’s (West Gorton), before becoming Ardwick Association FC in 1887. It wasn’t until 1894 that they were named Manchester City. They played at Maine Road from 1923 until 2003, when they moved into the City of Manchester Stadium, now named the Etihad Stadium. Manchester United are their biggest rivals. Nicknamed the Citizens, Manchester City are currently managed by Josep Guardiola. The purchase of the club by Sheikh Mansour in 2008 transformed the club into a heavyweight in the transfer market, while City won the Premier League in the 2011/12 season, the first time in 44 years the club had won the English top flight.

Manchester City Football Club is one of the two Premier League teams from Manchester and, along with their city rivals United, they are one of just seven clubs to win the Premier League since it was founded in 1992. In the last decade, Manchester City has won 4 top flight titles, adding to their previous two won in 1937 and 1968 for a total of 6 domestic titles.

The club was founded in 1880 under the name St.Mark’s, before changing the name to Ardwick Association Football Club in 1887 and finally Manchester City in 1894. Manchester City played their games at Maine Road since 1923 before moving to the City of Manchester Stadium in 2003, a stadium currently known as Etihad Stadium after City’s main sponsors.

The rise of Manchester City started in 2008 when the club was bought by Abu Dhabi United Group, which invested heavily in the club. The current manager is famous Spaniard Pep Guardiola, under whose guidance the club won the only title with 100 points in history in 2018.

Since they are always very active in the transfer market, Manchester City transfer news are quite popular. You can read all about transfer gossip and rumours on our website.

Without much doubt, David Silva was the most important signing of the new Manchester City era. The Spanish midfielder came to the club for a modest fee compared to other City transfers at the time and he spent 10 seasons at the club, winning 4 Premier League titles, 2 FA Cups and 5 League Cups with the team.

At the time of the transfer, Manchester City’s acquisition of Kevin De Bruyne for £55 million was the second most expensive transfer in English football. However, unlike many other expensive fees that City paid, De Bruyne proved to be a brilliant signing. The Belgian winger is still with the club and very much a crucial piece in the team.

Sergio Agüero from Atlético Madrid for £36m in 2011

The Argentinian striker was already a household name after his successful stint in Madrid and signing him was a clear signal of City’s ambitions. Sergio “Kun” Agüero is still with the club and during his 9 years in Manchester he scored 180 league goals.

Greeted by his older brother Kolo who arrived at the club a year prior from Arsenal, Yaya Touré quickly established his place in the team. In his eight years at the club, the midfielder from Ivory Coast scored many important goals and instilled a winning culture at Manchester City.

Vincent Kompany from Hamburger SV for £8 in 2008

One of the first City signings after the 2008 takeover by Abu Dhabi United Group, Vincent Kompany was bought for a rather modest fee of around £8 million. The Belgian defender became an indispensable part of the club’s defence and he ended up wearing the captain’s armband during his 11 successful years with the Citizens.