Alphonso Davies is a Canadian professional footballer whose origin can be traced back to a refugee camp in Ghana.

The early life of Alphonso Davies

He was born to Liberian parents from Buduburum in 2000. Together with his parents, they fled the country during the Second Liberian Civil War. They moved to Canada at the age of five and eventually relocated to Edmonton. It was until 2017 when he acquired Canadian citizenship. He was enrolled in St. Nicholas Catholic Junior High school because soccer was his passion though he had a language problem. He started as a Free Footie soccer player-this was an after-school tournament for inner-cycle junior players who hailed from less fortunate backgrounds. The league accommodated children who could neither afford playing equipment nor transportation to the venues for events. Edmonton internationals gave him the platform to be seen by other clubs and Edmonton Strikers signed him up. 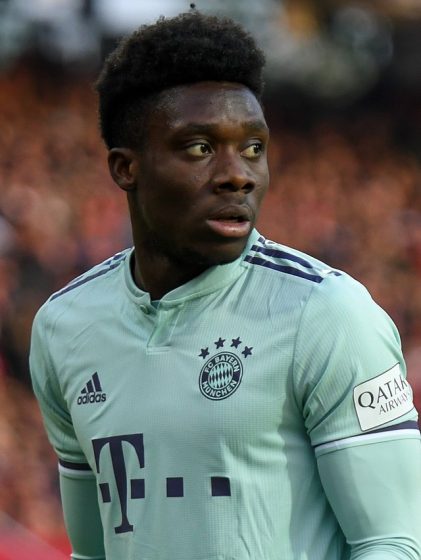 At the age of 14 years, Alphonso Davies was flying the flags of Whitecaps FC Residency in 2015. The club was in a preseason tour in 2016 when Davies signed with the Whitecaps FC 2 to play in the USL. At this time, he became the youngest person to acquire a signature to participate in the USL. In April 2016, Davies made his debut at fifteen years and five months. In May 2016, he scored his first professional goal and become the youngest footballer to get a goal in the USL at 15 years. Davies held this record until December 2020. During his 2016 season career in the USL, he made 11 appearances and scored two goals.

Alphonso Davies impressed many people during his early days as a footballer. His work rate made several teams in Europe get interested in his services. The clubs that kept keen eyes on Davies include Manchester United, Chelsea, and Liverpool. By 2017, he was named among the top 60 best young soccer players around the globe. Another platform that made Davies shine further was MLS-all-star vs. Juventus game in August 2018. The same year, Davies won the Vancouver Whitecaps FC Player of the Year Award and Whitecap's Goal of the Year Award. In his final match in the MLS, Davis scored two goals to give his team a 2-1 win over Portland Timbers in October 2018.

It was not until July 2018 when Bayern Munich identified Alphonso Davies as a long-term solution to their wing-back issues. Bayern Munich and Vancouver entered into a multi-million-dollar deal were to allow the young star to stay with the club to the end of the 2018 season before joining the Bundesliga giants in January 2019. He made his debut with Bayern Munich in the Telecom Cup against Borussia Monchengladbach on 12th January 2019. However, he made his Bundesliga debut on January 27th against VFB Stuttgart when he came in late for Kingsley Coman. His first goal in Bundesliga came on the 17th day of March 2019 against Mainz 05. At the age of 18 months, he became the youngest player to score for Bayern in the Bundesliga after Roque Santa Cruz. He also becomes the first Canadian international male soccer player to score for the Bundesliga giants. Alphonso lifted his first Bundesliga title on 18th May 2019. Davies won his first DBF-Pokal as a Bayern player in the same month. Bayern eased 3-0 past RB Leipzig in the final match though he did not appear in the match-day squad. The first time he made his Bundesliga start was the 2019-20 Bundesliga season and the first Champions League start in Beyern's colour on 6th November 2019 against Olympiacos. The 2019-2020 seasons saw Davies enjoy life as a full back on the left flank following the absence of Sule and Nicholas Hernandez. Davies seized the opportunity and made it into the list of the best-left fullbacks in the world.

The Bundesliga fans still recall how Davies ran down Dortmund's star Erling Haaland at a speed of 35.5 km/h. similarly, he still holds the fastest pace in Bundesliga as he clocked 36.51 kilometres per hour against a Werder Bremen player. During the 2019-20 season, Davies won the Bundesliga Rookie of the Year Accolade. Davies played a part in Bayern's win against Paris Saint Germaine in 2019. He became the first Canadian international to win the men's Champions League. His trophy cabinet still grows even on the individual scale. This trend follows the third-place 2020 golden Boy Award in Bundesliga.

Alphonso Davies received his first call up to the national u-15 in 2014. During the 2016 friendly match against England, he was called upon to show his talent for the u-20 team. During the 2016 match against Jamaica, he was also given a chance with the u-20 team. Alphonso was named the Canadian male Player of the Year in 2017 from the friendly matches. The performance with the senior team also earned him the Player of the Year for two consecutive years between 2016 and 2017.

Davies was named to the Canadian senior soccer team on 30th May 2019 to participate in the CONCAFA Gold Cup but did not make it to the match-day squad due to injury. He will remain in Canadian soccer history for his contribution in the World cup qualifier against Panama where he made a highlight-reel goal to win the match at a speed of 37.1 km/h to keep the ball in play.

Davies is a utility player based on his style of play. He has the potential to deliver as a wing-back, a midfielder, or a winger. He has an explosive pace and dribbling prowess that gives opponents rough time to contain. He is so creative that he can create chances when people least expect one. When Davies plays as a winger, his teammates anticipate sumptuous deliveries into the goal area. His deliveries result in goals for the team. On the other hand, strikers have a force to reckon with when they face Davies because of his accuracy and pace. He is the right player to take the Canadian National team to greater heights.