If you are planning to place a bet on the upcoming Canadian Premier League fixture between York United and HFX Wanderers, then you have to check out this match preview and our top predictions for their upcoming fixture this Saturday.

Betting Picks and Odds for the Fixture on Saturday

These are the top predictions and free betting picks for the upcoming York United vs HFX Wanderers fixture at the end of this weekend. All odds are from BetMGM and are subject to change. Make sure to double-check them on your bet slip before completing these bets.

Suspensions and Injuries Regarding the Saturday Match

In this section, you can check out all the injured or suspended players on the York United vs HFX Wanderers team before the game.

There aren't any suspended or new injured players on York United's squad. Only Martin Graiciar and Austin Ricci remain on the injury list, for now.

HFX Wanderers’ only injured player remains João Morelli and there are no suspended players on their squad right now.

Recent Head-to-Head Stats and Match Histories for the Game

You can check out these tables to see the most recent scores and statistics for the York United vs HFX Wanderers fixture.

Even though York United hasn't performed at their best during this season, so far, this time around they are our favorites. We also think that there will be more than 2.5 total goals scored during the game, as there were in many of the recent York United games. 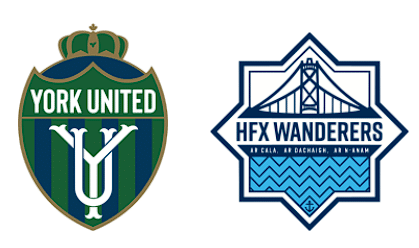