In this fixture, we will be covering the United States vs Grenada fixture, which will be on the 11th of June. If you want to see more CONCACAF Nations League – League A predictions and picks, you should check out our website.

Top Odds & Picks for United States vs Grenada on Saturday

We went through the data for the United States vs Grenada fixture and came up with the following picks and top betting lines. All odds are from BetMGM and are correct at the time of writing. Make sure to double-check the before betting because they are also subject to change.

Four of the last six matches for Grenada and four of the last five games for United States’ national team ended without both teams scoring goals. We think that Saturday's match will also end the same way because two of the three head-to-head fixtures between these teams also ended with clean sheets.

Grenada already lost one of their CONCACAF Nations League matches, and we don't think that they can win against the USMNT. These two teams have played together three times in the past, and in all of those matches, Grenada has lost. Also, the USMNT's recent form shows only one loss in the last five games they played, while Grenada lost or drew 90% of the last ten games they played.

In this section, you can check out the most recent lineup information about the upcoming United States vs Grenada game.

United States doesn't have any injured or suspended players, so they will be facing their opponents at full strength this weekend.

Grenada doesn't have any injured or suspended players right now, so they will be facing the USMNT at 100% on Saturday.

Below, you can check out the most recent match histories and scores for United States vs Grenada.

The USMNT has all the advantages in this upcoming match on Saturday. They completely dominate Grenada head-to-head, they are in a better recent form, and last but not least, they will be hosting the upcoming game. Also, we don't think that both teams will score during the match. 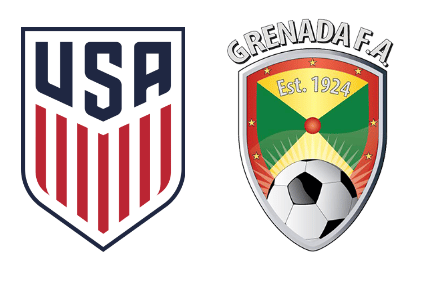