This Sunday up against each other we have the United States and Bosnia-Herzegovina in a pressure-free duel that will answer some questions regarding the team’s chances for international success.

The information following this paragraph will provide you with key insight into the upcoming game. For more expert international friendlies picks, please visit our dedicated page.

Historical data is insufficient for us to make a prediction based only on that but we do have 2 games and 1 resulted in a 0:0 draw between the two teams. The other game was a narrow 3:4 victory for the United States. The teams look balanced and equal and chances are a draw will be the end outcome of this game. Both teams have their best 11 men ready for battle and this will be a good place for us to end this prediction.

In those 2 games that we’ve had so far, we saw 1 goalless game and 1 that had 7 goals. The 3rd edition of this derby will be a friendly game and the teams won’t have any pressure to perform for a victory so they will be able to experiment with attacks. The United States took part in 2 games in the last 3 where both teams scored a goal. The same goes for Bosnia-Herzegovina as well

As mentioned above one of the games between the two clubs resulted in 7 goals being scored! Chances are we won’t see this again at the Dignity Heath Tennis Center but as this is just a friendly game both teams will want to show the best they can do. Neither side will gain anything from defensive football.

United States vs Bosnia-Herzegovina: Best odds and most important stats

And here is the key United States vs Bosnia-Herzegovina statistics and suggestions:

United States vs Bosnia-Herzegovina: Pressure is off

Both sides are well-known in the world of football. Both sides have faced each other before and there aren’t going to be that many secrets between them ahead of this game. Both Gregg Berhalter and Ivaylo Petev will look to experiment in this game and this is all provides enough chances for the teams to give the spectators something to cheer for. Our football experts predict a 2:2 draw between the two teams. Also, there is a high chance the match will end with more than 2.5 goals. 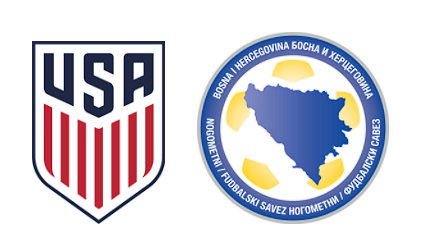 Common questions for the United States vs Bosnia-Herzegovina game: