The home side Deportivo Toluca will host this Round 10 tie from the 2021 Apertura versus Atletico San Luis. This article aims to provide you with the best free betting tips available for this match.

Here is our team of experts take on the game at hand:

The odds are true at the time of writing but are subject to changes at all times. Always check your bet slip before finalizing your bet.  Our recommended bookmaker for this match is BetMGM.

Deportivo Toluca is ranked 2nd in the table but has the same amount of points as the league-leaders Club America. The hosts have suffered just 2 defeats in their 10 matches, which is the same as Atletico San Luis, but Toluca has won two times more games. Having the home side advantage is great for Toluca as the squad knows how to use it. The hosts are unbeaten at home, and average 2.5 scored goals. Head-to-head, the advantage is again in Toluca’s favor with 6 victories in their last 10 meetings.

Toluca is the highest-scoring team in the Liga MX, and Atletico is the 3rd highest scoring. They are also the two highest conceding teams in the top half of the table. All of this definitely leads to a BTTS – Yes bet. So far in the campaign, Toluca has conceded in 100% of its home games, and Atletico has also conceded in every game it played on the road.

With The home team averaging 2.5 goals scored we can easily go over the 2.5 mark with just their goals. As we also mentioned, both sides have had troublesome defenses, so we expect to see quite a few balls in the net. 100% of Toluca's home matches have had over 2.5 goals scored, and 4/5 of Atletico's games as guests have also had 3 or more goals scored.

Toluca vs Atletico San Luis: The latest stats and selection of the best odds

Can Deportivo Toluca hold to the top?

Stepping into the closing games of the campaign, every point really starts to matter. Especially after Toluca just lost its second tie to Monterrey who is now just 3 points behind. Furthermore, the hosts have tied the 1st place in points, but they’ve played one game more than Club America. Of course, finishing first isn’t as important as keeping a spot in the top 4, but Deportivo Toluca cannot lose focus.

On the other hand, the points would be crucial for Atletico San Luis as a win could possibly propel them to the top 4. The stakes are set high for this Liga MX tie. 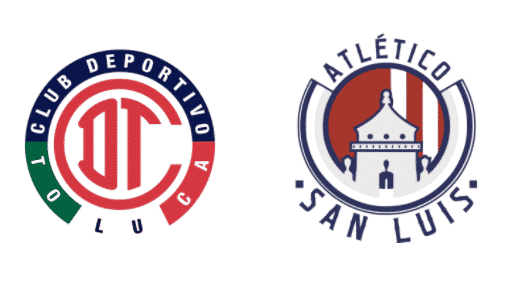