In this article, we will go over the top betting picks and the latest odds for the upcoming Liga MX match between Tijuana and Toluca.

These are the top three betting picks we settled on for the upcoming Tijuana vs Toluca Liga MX match. These betting lines are from BetMGM's platform.

Please make sure you double-check the odds on the bookie's platform or your bet slip before you place any of these bets because they could have changed.

Toluca is currently first in the Liga MX standings with two wins, so far, while Tijuana lost the two matches they played in the tournament. Also, Toluca won two of the last three away games they played compared to Tijuana, who lost two out of the three games they hosted.

In the tables below, you can see all the relevant statistics and scores for the upcoming Tijuana vs Toluca match.

There are no injured or suspended players on Tijuana's team, but Toluca has one injured defender that won't make it to the game on Saturday. Anibal Chala is out with a calf injury and hasn't played in the last five games this year.

Even with one injured player, we think that Toluca has better chances to win on Saturday, considering that their recent Liga MX form consists of wins, while their opponents lost all the games in the tournament, so far. 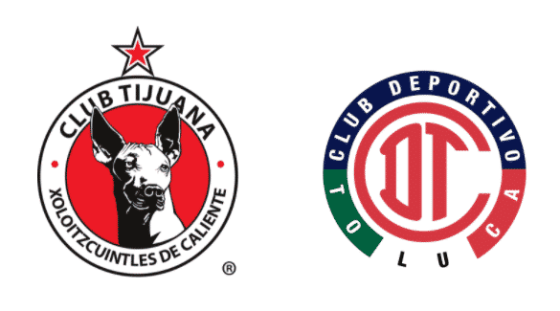