Today, we will go over the upcoming SJ Earthquakes vs Columbus Crew fixture and see what they have to offer when it comes to free picks and predictions. Continue reading to find out more.

Let's analyze the upcoming SJ Earthquakes vs Columbus Crew fixture and see what our betting experts think of it. The odds you will see here are from BetMGM, but they are also subject to change. This means that you should check out your bet slip before continuing.

Columbus Crew's recent form shows that they are in better shape than their opponents with two wins and two draws this year. SJ Earthquakes on the other hand lost the only game they played in 2022, so far. Also, the Crew won three of the last five matches they played against SJ Earthquakes.

Two of the last three matches for both SJ Earthquakes and Columbus Crew ended with more than 2.5 total goals scored. We think that is a likely outcome for Saturday with three of the last four head-to-head games between them ending similarly.

Let's see what the lineups on Saturday will look like based on the missing players from both teams.

The only injury on SJ Earthquakes’ roster is Shea Salinas who injured his knee last October.

Columbia Crew has two injuries on record – Kevin Molino who has had a knee injury since last summer and defender Josh Williams who got injured toward the end of last month. His prognosis is still unclear, so we can't give you a return date.

In these tables, you can check out the most recent odds and stats for the upcoming match on Saturday.

SJ Earthquakes aren't in good shape and even though they don't have any new injuries, they will have a tough time beating Columbus Crew this weekend. There is also a chance for more than 2.5 total goals scored during the match. Columbus Crew is at the top right now, but will they be able to keep that place for long? 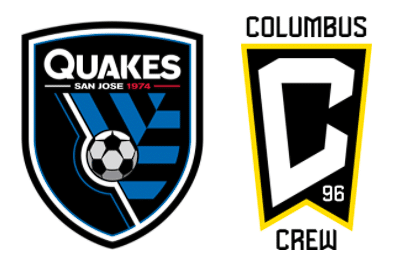 Prevalent Q&As for SJ Earthquakes vs Columbus Crew on Saturday