Top Picks and Predictions for the Thursday Match

Here are the top free picks from our experts for the Thursday semi-final. All odds are from BetMGM and are subject to change. Make sure to double-check your bet slip.

Right now, Seattle Sounders are in better form than their current opponent with three wins and two draws as their latest fixtures. On the other hand, the away team lost three of the last five matches they played. We also have to mention that the last time Seattle Sounders hosted a game against New York City it ended in favor of the home team.

Here, you can read about the latest team injuries and lineups for this week's match.

The Sounders don't have any injured or suspended players right now, so they will be playing on Thursday at 100%.

New York City doesn't have any suspended players, but Anton Tinnerholm is still going to miss the game because of the Achilles tendon rupture he suffered last fall.

These tables are full of the latest match stats and data for both teams before their upcoming game.

Seattle Sounders and New York City are two of the top teams in the MLS, but when it comes to the CONCACAF Champions League, we have seen more surprises recently. New York City seems to be in bad recent form based on their latest games, even though they started the season quite well. We don't think they can win against the Sounders on their home field with their current form. 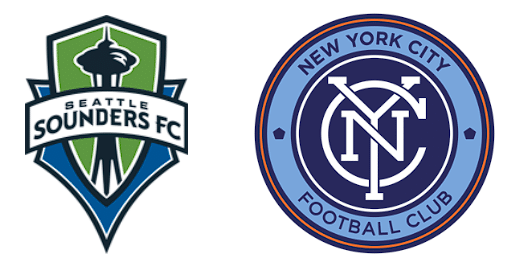 FAQs Regarding the Seattle Sounders vs New York City Match