These are the Liga MX predictions for the upcoming fixture involving Queretaro and Pachuca. If you want to see more Liga MX odds, you are welcome to check out our website.

Below, we have listed the top free betting picks for the Queretaro vs Pachuca fixture, and the betting lines used are from our recommended bookmaker BetMGM.

Remember to always double-check the betting lines before you place any wagers because they could have changed after we posted this article.

Four of the last five games that Pachuca played away from home ended with both teams scoring goals. For Queretaro, two of the last three head-to-head games they hosted against Los Tuzos ended with the same outcome, including their last game in February.

In the tables below, you can check out the most recent statistics and match histories for both Queretaro and Pachuca.

Both Queretaro and Pachuca are currently in the last positions in the Liga MX table and they both have three points. This match between them can propel one of them to the middle of the table to a potential 1/8-final qualification.

There are no injured players on either side of the pitch, but there is one player that will miss the game on Monday 100%. Queretaro's forward Jonathan David Dos Santos Dure played his first game of the season against UANL Tigres and received a red card near the end of the fixture. Pachuca doesn't have any suspended players. 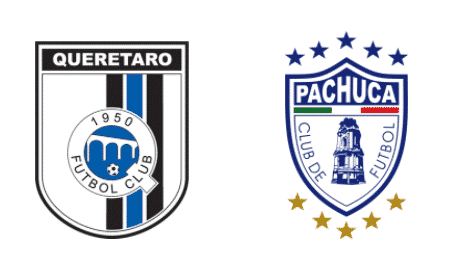