Puebla and Leon will continue their rivalry this Sunday with another duel that might turn out to be of very big importance in the long run for Liga MX.

Puebla vs Leon: Top Predictions and Betting Lines for Sunday

If you need help finding the best bets for Puebla vs Leon you have arrived at the right place. For more expert Liga MX picks, please visit our dedicated page.

Leon is a real treat to watch so far this season, currently ranked 6th in Liga MX. They have 1 more game yet to play and if they win it they can rise up all the way to the 3rd or 2nd position. The history of this derby does suggest a slight advantage to Leon – in the 19 times the two teams played against each other Puebla won 7 games, Leon won 8 games, and the rest resulted in ties. The momentum that Leon has is reason enough to predict a different outcome. In their last 5 games, Leon won 3, tied 1, and lost 1, while Puebla managed to secure only 2 narrow wins.

In 4 of the last 5 times, these two teams faced they both managed to produce good attacking movement and score goals. Historically even two sides, enter the game with the idea to score. If Leon scores goals and wins the game they will launch themselves to the 3rd position in Liga MX, if Puebla secures the win they will get a breath of fresh air and a place in the middle of the table. Puebla’s last 6 games 4 had both teams scoring goals, but this isn’t the case for Leon, so tread lightly when making this bet.

Yes, the last few games for Leon weren’t all that impressive to watch in terms of goals, but our football experts say that the historic role will play a bigger part in this game. In 7 of the last 10 times the two opponents met, the games had more than 2.5 goals. 53 % of the games between the two teams ended in Over 2.5 goals. It is important to take into account the fantastic season that Leon is having as well.

Head-to-head data for the Puebla vs Leon game

Those are the key head-to-head statistics and odds for Puebla vs Leon match:

Top of the table or sinking down for Leon?

Leon has been impressing the fans this season so far. They have a winning record of 42 % from their 12 games and the fans will expect more of the same. The fact that this would be an away game for them might turn out to be a slight issue for Ariel Holan and his boys, so securing your bet with a Draw or Leon is a good idea. Neither side will have injuries or suspensions to worry about so they will count on their very best players to perform. Which may indicate a thrilling 90 minutes at Estadio Cuauhtemoc. Angel Mena is set to play for this game and he really looks sharp so far with 4 goals and ready to put more in the bank. 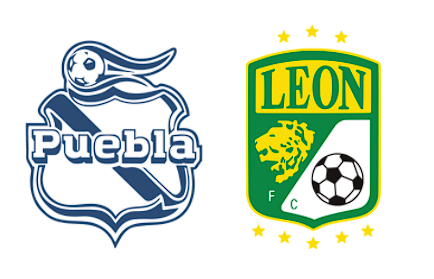 Common questions for the Puebla vs Leon game: