New York City will be facing SJ Earthquakes on the 1st of May and we will go over the statistics to figure out the best betting picks and lines for the match on Sunday.

After going over the data, we thought that the free picks listed below are the best for betting on New York City vs SJ Earthquakes' match this Sunday. All odds we used are from BetMGM and correct at the time of writing. Before placing these wagers check out your bet slip because the odds are subject to change.

There is a high chance we will see more than 2.5 total goals being scored because many of the games these two teams played, so far, in the MLS ended that way. Actually, four of the last five matches both of them played ended with over 2.5 goals scored. Also, four of the last five games between New York City and SJ Earthquakes ended the same way.

Here, you can check out the most recent information about the injuries and suspensions for both teams in the tournament.

New York City only has one injured player right now – A. Tinnerholm who is out with an Achilles tendon injury.

SJ Earthquakes will have to play without three of their own this weekend because of various injuries – Judson, J. Lopez, and G. Fuentes.

In the tables below, you can check out the most recent scores and match histories for both New York City and SJ Earthquakes.

Our main prediction for this weekend is that New York City will once again dominate SJ Earthquakes. Judging by their form this season, New York City is doing quite well compared to the Earthquakes who are almost at the bottom of their Conference. Also, we suspect that we will see more than 2.5 total goals, like in many of the games involving these teams this season and in previous years. 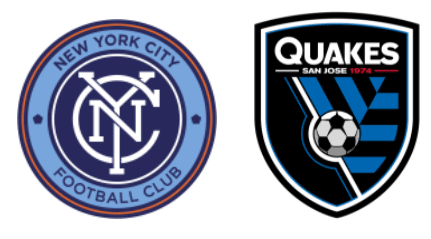