Let's check out the upcoming club-friendly, which will be on Thursday between Nashville and America. Check out this and more soccer betting picks on our website.

Below, you can check out the top match predictions and betting lines for the upcoming Nashville vs America fixture according to our betting experts. All odds are from BetMGM and are subject to change. Make sure to double-check them before continuing.

Three of the last five games for Nashville and four of the last five matches for America ended with both teams scoring goals. We believe that the first game between these two teams has a very high chance of ending with goals from both sides, too.

There have been a lot of goals scored for both teams recently in the fixtures they played. Four of the last five matches for America and three of the last five games for Nashville ended with more than 2.5 total goals scored. We believe that the next for those two teams, which happens to be their first head-to-head fixture will also end with a high-scoring outcome.

Latest Injuries and Suspensions for Both Teams

In this section, you can check out the latest injuries and suspensions for both teams before their upcoming game on Thursday.

Nashville will be facing their opponents at full strength because they don't have any suspended or injured players at this time.

America will also be playing at 100% because they also don't have any suspended or injured players on their squad right now.

Match Scores and Statistics for the Club Friendly

In the tables below, you can check out the most recent match histories and scores for the upcoming Nashville vs America match. This will be their first game together, so there is no history to show.

Club America and Nashville have never played together beforehand, so this will be the first time for both of them. The match will be hosted by Nashville, which automatically gives them the advantage for Thursday. Although, we won't be crowning them as winners just yet because America's current form is slightly better than Nashville's. Also, Club America hasn't lost even one of the last six away games they played. We believe that the upcoming game will most likely end with more than 2.5 total goals scored from both sides. 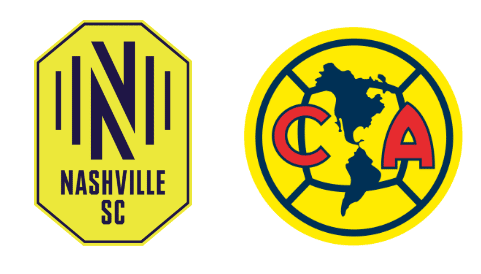