After playing a pre-season friendly, the two teams from this match-up will meet again but this time in the Liga MX 6th Round. Stay tuned for the best free predictions for this game.

Our team of experts handpicked the following free predictions for the current match-up:

Odds are true at the time of writing but may change at all times without notice. Make sure you check your bet slip before placing a final bet. Our recommended bookmaker for this match is BetMGM.

Chivas has been struggling after the beginning of the new campaign, and this is the reason why the bookies have skyrocketed the odds of their victory. However, we aren't convinced that Monterrey will necessarily win 3 points in this game. Head-to-head, things are all pretty tied-up with both sides winning 4 games and drawing the remaining two. Both teams are unbeaten so far in the season in their positions as home/guest side. However, the last 5 competitive meetings in which Monterrey hosted the game vs Chivas resulted in only a single victory for the home team.

Monterrey is in a horrific goal-scoring form, after finding the net in every one of its last 15 games. Chivas would've wished to have done better in this department, after scoring in only 6 of its most recent 10 matches which still is a decent result. However, Monterrey concedes more frequently than C.D. Guadalajara, meaning that this BTTS bet can easily see the light.

Despite believing that both sides will find the net, we prefer to back the under 2.5 goals bet as opposed to the over. The majority of the hosts' matches, precisely 8 of their last 10, have had under 2.5 goals scored. 5 of those games resulted in a 1-1 draw, which would've won both of our BTTS and Total Goals bets. The rate isn't too bad with Chivas too, with 50% of its most recent matches having under 2.5 goals.

Monterrey vs Guadalajara: The latest stats and selection of the best odds

Guadalajara won two of the last three fixtures against Monterrey, so the history between the two teams is certain, but the recent results for both teams suggest that Guadalajara isn't a 100% winner on Sunday. Although Guadalajara is four points behind Monterrey in the Liga MX table, currently, if they win the match on Sunday they will be able to climb at least a few positions, depending on how other fixtures end. 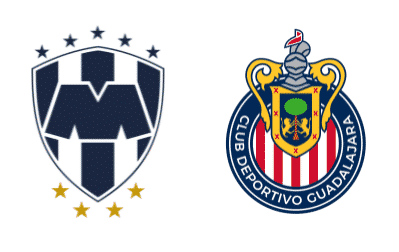