Juarez and Toluca lock horns on the opening weekend of Liga MX having just faced each other twice in recent history – the last day of the previous campaign and in a friendly. Will this game play out differently? Find out with our Juarez vs Toluca match preview with free tips, predictions and odds mentioned along the way.

Our top picks for Juarez vs Toluca

A win to kick things off

The opening set of fixtures for a campaign can be challenging to make predictions for. We have no concerns over backing Juarez to win this game though and the odds available are very attractive too. Juarez had the better season last year; albeit it was hardly a great campaign for them. They also boast better form having won five of their last 10 compared to just the two for Toluca. Finally, there is the head to head record; Juarez have won four of the last five meetings. In fact, to cut it differently, they've won the last four.

The head to head record we've just discussed in our first prediction comes in useful for informing our second tip too; they four wins Juarez have recorded have all been under 2.5 goals. The longer term form of Juarez in regards to total goals is the driver of our logic. Juarez's last 10 games have seen just 21 goals. That's a game average of 2.1. Now, Toluca's form is less compelling with an average of 3.5. The reason we're not letting that influence our decision is because Juarez will dictate how this match unfolds; the last four meetings have ended in Juarez wins with under 2.5 goals scored.

A narrow win for Juarez

Our final prediction is that Juarez will run out narrow winners at 1-0. The goals haven't exactly been pouring down for Juarez with the fact they've averaged just 1.1 goals scored per game across their last 10. What they do have though is a splendid defensive record against Toluca; they've not conceded in four meetings whilst three of those games have ended 1-0. Those three factors combine to give us the score line. Sound logic if we do say so ourselves.

Juarez vs Toluca: Check out the latest form

Juarez to continue head to head dominance over Toluca

How much can you read into the form book when a new season gets underway? The Juarez fan base will be hoping quite a bit given they've won five of their last 10 matches, which is a spell that includes two victories over their opponents, Toluca. The hosts don't score loads of goals so a clean sheet will be important; that means Gustavo Velazquez will need to be on form. For Toluca, their challenge is to break that rear guard down in order to make a winning start and to stop the rot they're in respect of the head to head. If they're to do so, Alexis Canelo will likely be the man to make it happen; he hit 20 goals in 33 games last season.

FAQ on Juarez vs Toluca 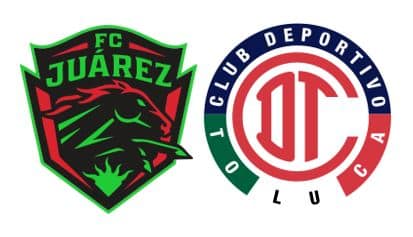