Inter Miami continue to struggle for good results with the team being let down by bad individual mistakes and they take on DC United at the DRV PNK Stadium in Florida.

Inter Miami fell to a 1-0 loss to Chicago Fire after a goalkeeping error from McCarthy cost the team badly. DC United’s poor form continued with the team losing 1-0 to Philadelphia Union. The best picks for this match would be:

Inter Miami are badly in need of an uplift from their home games to start making places up the league table. Apart from the match against strugglers Cincinnati, Inter Miami have not been able to dominate games. This might be a different story against DC United, who have lost four in the recent five matches.

DC United have conceded 11 goals from the seven league outings. Inter Miami have not been prolific going forward and manager Phil Neville is still trying to get the best out of his players. However, a powerful forward like Higuain will relish the prospect of playing against DC United with their leaky defense. At the other end, DC United may not contribute too much to the tally, but conceding possession in key areas of the pitch has been a problem for Inter Miami. The visitors might profit from this situation.

Gonzalo Higuain is finally showing signs of settling down in the MLS. He is up to 4 goals in just six appearances for the campaign. The Argentine forward has the pace and presence to trouble any defense in the division. He would particularly feel at home when facing DC United, who are close to hitting the worst defensive record in the division with only Cincinnati faring worse.

Inter Miami will be hoping that playing in front of a full capacity crowd at the DRV PNK Stadium might just be the incentive for the team to start picking up a positive set of results at home. Apart from the away win over Cincinnati, Inter Miami have not been able to assert their presence in the matches. Coach Phil Neville has had several excuses already this season, while he will be without Leandro González Pirez for this match.

Hernán Losada has been seeing his team slip down the table and they are now just two points away from the bottom. The poor start to the season has not been overcome by DC United, who only managed to finish above Cincinnati in the Eastern Conference last season. DC United have had to deal with mounting injury problems of late. Losada is currently missing Edison Flores, Yordy Reyna, Donovan Pines, Steven Birnbaum, Chris Odoi-Atsem, and Erik Sorga. Bill Hamid is doubtful for the game. 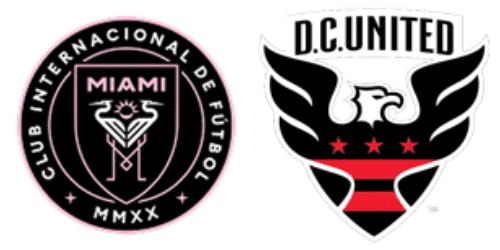 Where is the match scheduled? DRV PNK Stadium

Which team is the favorite to win? Inter Miami