Find out the best predictions and betting picks for the upcoming Inter Miami vs Cincinnati fixture this weekend. If you are looking for more MLS predictions, you can check out our site's most recent articles.

Top Predictions and Betting Picks for Inter Miami vs Cincinnati

Below, you can check out the most popular betting picks for the Inter Miami vs Cincinnati fixture:

These odds are all from BetMGM, so before wagering check your bet slip for changes because all odds are subject to change.

We have seen goals from both sides of the match in many of the matches involving Inter Miami, Cincinnati, or both. Two of the three head-to-head games they played ended with a BTTS outcome. Also, three of the last five matches for Cincinnati ended the same way.

Both Inter Miami and Cincinnati have the worst team form in all of the Eastern Conference out of the last five matches they played. Also, Cincinnati has never won a match against Inter Miami. These two didn't meet often, only three times, for now, and in all of those games, Inter Miami won. Cincinnati won only four matches this season, and it's highly doubtful they will win this weekend.

This data is for the upcoming Inter Miami vs Cincinnati fixture, and before betting on the match, you should look through it.

Inter Miami has the same injured players as in the recent matches they played – Alvarado, Jones, Fray, and Shawcross. We don't think that would be a problem for them against Cincinnati on Sunday.

The away team has a total of three injured players and the most recent injuries and Yuya Kubo's ankle injury and Gustavo Vallecilla's muscle injury, which is the first in his career. We think that the goal number for the Sunday match will be more than 2.5 total goals scored because of the recent history between the teams and their performance in the MLS. 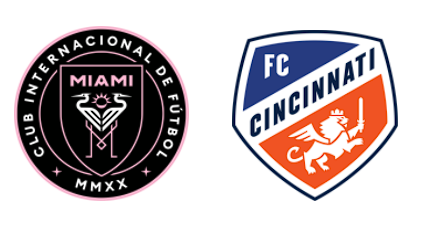