SJ Earthquakes will be facing Houston Dynamo on the 18th of July as a part of the Major League Soccer season and we will be going through all the data related to it.

Betting Picks and Betting Lines for the Fixture

We tasked our top betting experts and they came up with the following free betting picks for the SJ Earthquakes vs Houston Dynamo match. The betting lines from BetMGM are subject to change, so before placing your bets, double-check the betting lines on the bookie platform.

Here, you can check out the most recent lineups and player injuries regarding SJ Earthquakes vs Houston Dynamo.

Gilbert Fuentes, Siad Haji, and Judson are the only injured players from SJ Earthquakes at this time, so they will be sidelined for the Monday game.

Houston Dynamo doesn't have any injured or suspended players right now, so they will be playing at 100% this weekend.

In these tables, you can see the most recent fixtures for SJ Earthquakes and Houston Dynamo and how they ended, including the last few head-to-head matches.

Our Latest Prediction Regarding the Upcoming Match

Our top predictions for the upcoming match are that we will see both teams scoring during the game and that Houston Dynamo would prevail. Houston Dynamo doesn't have any injuries or suspended players and they are also in better form than their opponents. 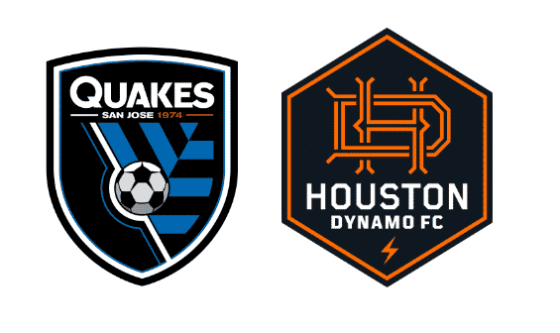