Let's go over the match details and stats for the upcoming HFX Wanderers vs York United fixture this weekend. If you want to see more Canadian Premier League predictions and odds, you can check out our website.

All odds are from BetMGM and are subject to change. Make sure to double-check them before wagering.

Three of the last four games between HFX Wanderers and York United ended with clean sheets. We think that history will repeat itself in their next game together, too. Also, we have seen clean sheets in four of the last five games that both teams played separately.

There have been already two games between them this year and in both of them, HFX Wanderers won. We think that that will happen once again this Monday because, despite both teams’ recent bad form, HFX Wanderers are four points ahead of York United in the Canadian Premier League table.

In this section, you can check out the latest injury reports and suspensions for both teams before their upcoming game next week.

João Morelli is the only injured player from HFX Wanderers and he will be out at least until the end of the year. The team doesn't have any suspended players, but Andre Rampersad is at risk with four yellow cards already.

Martin Graiciar and Austin Ricci are both out due to cruciate ligament surgeries, so they won't make it next week. There aren't any suspended players, but Mateo Hernández and Jordan Wilson already have four yellow cards and are at risk.

These are the latest statistics and histories for the upcoming HFX Wanderers vs York United match this weekend.

Our main predictions for the upcoming HFX Wanderers vs York United game are that we will most likely see only one of the teams scoring. If we are correct about our second prediction, that team will be HFX Wanderers and they will win the game at the end. 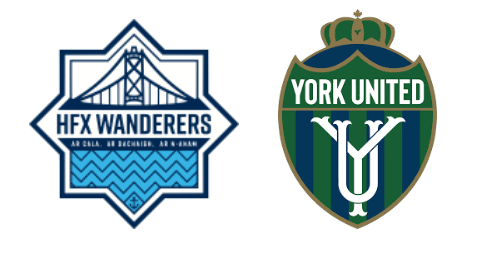