Atletico San Luis were the whipping boys last season. Will it be more of the same in 2021/22? Find out with our Guadalajara vs Atletico San Luis match preview with free tips, predictions and odds mentioned along the way.

Our top predictions for Guadalajara vs Atletico San Luis

Guadalajara to make winning start to the campaign

Our first prediction is a simple one. We expect Guadalajara to run out winners here. Admittedly, Atletico San Luis beat them in the last meeting but prior to that they hadn't done so since 2011. As for more recent form, Guadalajara aren't flying with one win in five but it wasn't too long ago that they'd won three on the spin. As for Atletico San Luis, they've been utterly dreadful; they've lost seven on the bounce and not won in 10. We suspect you better make it 11.

Could it be an easy win?

Next up we up the odds by applying a handicap win to Guadalajara. The general form obviously paints a fairly clear picture of how poor Atletico San Luis have been but they've shipped a fair few goals in that run of defeats too. In the last five games they've conceded 16. Last time out Guadalajara hit three to end a bit of a dry spell for them. Confidence could be back in the boots; if it is, a comfortable win is more than plausible.

The final prediction we're offering up is for there to be over 2.5 goals as we kick the new campaign off with a goalfest. The last five head to head games have all seen a minimum of three goals whilst recent form doesn't turn us away from it too much either. Guadalajara have gone over 2.5 goals twice in four whilst Atletico San Luis are every neutrals favourite watch with 21 goals across their last five matches; that's over four goals a game.

An even contest lays in wait

Atletico San Luis recorded a bit of a shock win over Guadalajara when they last met. You can bet that Guadalajara will want to put that right on the opening weekend of the new campaign. Their form has been mixed of late but a new season is a new start. They'll need to get off to a winning start without Uriel Antuna though; he's at the Olympics. A fresh start is exactly what Atletico San Luis will be thinking too. They were shocking last year as their run of 10 without a run will give you an idea of. They were toothless in attack and leaky at the back. Have they solved those problems? The loss of their top scorer – Nicolas Ibanez – would suggest not. 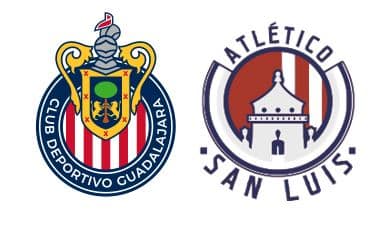