The MLS, or Major League Soccer, is the first-tier division of professional soccer in the US. It’s undoubtedly a league that is growing in popularity, even if it is not yet rivaling the likes of the NBA or MLB. With that said, did you know that over 50% of MLS players are from overseas? And to take things even further, there's a large portion of European MLS players currently participating in the league. This is what we will be taking a closer look at here – to see who are the best and most influential European players in the MLS right now.

There’s quite a pool to choose from, but we’ve narrowed things down to pick out the best from the bunch. So do read on and enjoy.

Since international players make up more than 50% of the entire MLS roster right now – it takes something special to stand out. The players that we’ve listed below have managed to achieve exactly that, and to ensure we keep things fair, we’ve covered positions from the goalkeeper all the way to star strikers. However, let’s kick things off with the man between the posts. 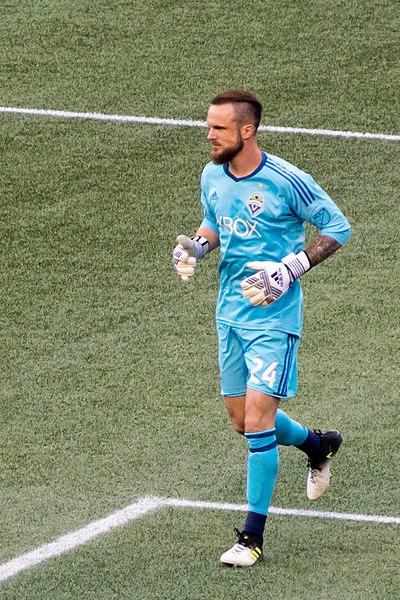 If you’re going to do well in the MLS, it’s not always about scoring goals. In fact, they often say that the best form of offense is to have a great defense. On that note, it’s tough to think of a goalkeeper who you’d rather have between the sticks than Stefan Frei. This Swiss goalkeeper has actually played his entire professional career in the MLS, so you could say he’s a bit of a veteran. Interestingly, however, Frei has lived most of his life in the US, and he is now a citizen as of 2017. He is also an MLS All-Star, so you can imagine the skills he has with saving the ball.

Moving on from the goalkeeper now, we have another star in the form of Anton Tinnerholm. Of all the European MLS players that play in defense, this man is one of our favorites. This Swedish sensation moved to the MLS in 2018, when he joined New York City, and he has been solid in defense ever since his move. At the time of writing, Tinnerholm has achieved more than 100 caps for the club, and he’s ever scored 9 goals – showing that he isn’t shy of attacking a corner every now and then either. He has also represented the Swedish national team on several occasions too, which is yet another accolade to add to his collection.

Métanire has previously enjoyed spells with Metz and Reims over in France, prior to coming to the MLS in 2019. Now aged 31, it would be fair to say that Métanire is one of the more experienced defenders in the league, and he’s certainly one of the best. But interestingly, Métanire, while being born in France, actually has heritage from Madagascar, which is why he has played internationally for them instead of France. But coming back to his triumphs in the MLS, Métanire has been critical for Minnesota United in the previous two seasons, and he is another MLS All-Star.

Pozuelo is one of the most skillful and creative European MLS players, which is why he plays as an attacking midfielder for his side – Toronto FC. Having been at this club since 2019, he has played more than 60 games and scored more than 20 goals. We can probably all agree, this isn’t too shabby for a midfielder, but hey – it must be the Spanish blood in him! These achievements have allowed Pozuelo to be named as part of the best XI for the MLS following the 2020 season, and if that wasn’t impressive enough, he led the table (joint) for most assists in the same season. Since he’s still going strong, some might say that things are only going to get better from here.

Moving on to another Spaniard now, we have Carles Gil. This man has bounced around all over the place in his career, playing for Valencia, Aston Villa, Deportivo La Coruna, and now, New England Revolution. He’s always been a talented player, everyone knows that, but his pace down the wing combined with his skill on the ball makes him one of the best European MLS players right now. Having been at the club since 2019, Gil has managed to hit home a total of 14 goals, but he has managed to set up many more – hence his prestigious reputation as a great supplying winger. Not only has Gil won the award for newcomer of the year in the MLS, he’s also been named to the best XI.

Finally, we have Szabolcs Schon, a man who is showing incredible talents at the ripe old age of 20. Although he has mainly played as a winger up until recent times, he has started to creep up and play as a forward on several occasions. And to be honest, he has a great shot on him, which is why we envisage him moving into a predominantly strikers role in the near future. As you may recall, a certain Cristiano Ronaldo did the exact same thing! He has only recently joined FC Dallas, quite literally within the last few months, but he is already being labeled as one of the most exciting prospects.

This was backed up by his recent performances in the Euro 2020 Championships too when he helped Hungary almost achieve the impossible and quality through the group. Thanks to his smaller frame, at just 5ft 8 and less than 150lbs, he is much nippier than other forwards in the MLS. And as you know, speed and skill are two great attributes when creating goal-scoring opportunities.