This is a preview of the Canadian Premier League meeting between Edmonton and York United at the IG field. Edmonton are fresh from their first win of the season while York United are still waiting to get their first three-point haul.

Edmonton got their Canadian Premier League campaign up and running after a 2-0 win over strugglers Forge. After a period of struggle, late goals from Soria and Jeannot Esua were able to provide a win for Edmonton. Meanwhile, York United produced a physical performance to grab a 2-2 draw against Pacific. The top picks for this match are:

Edmonton produced a steely performance to get the first three points of the campaign against Forge. However, they might struggle against the physical approach of York United. Furthermore, the strength of Jim Brennan’s team in set pieces could be a problem for the home team. In the past when these two teams have come up against each other, they have produced a stalemate in two out of the last five meetings with York United winning the remaining three. This time around, a stalemate could be on the cards.

Edmonton grabbed their first goals of the campaign against Forge after drawing a blank against Atletico Ottawa in the first game. The team has shown a lot of spirit to keep chasing goals. Meanwhile, York United are yet to keep a clean sheet, but they do have the capability of scoring from set piece situations.

This match should see an even contest with goals from Edmonton and York United cancelling out each other. York United have scored in back-to-back league matches but they have also conceded in both league games. They have sufficient strength to get a goal or two, while Edmonton can exploit York’s defensive problems.

Edmonton come on the back of a first victory since 2019. The sense of relief at the club is immense, but the team did play extremely well against Forge to come out as deserving winners. The big challenge for Alan Koch’s men will be to build on this result.

York United have made sure that they make the most of set piece situations, but the team continues to be quite poor in open play. Coach Jim Brennan, though, is not too worried about this statistic and it is likely to see York United continue to play in a familiar way. This might mean trouble for opposition even when they are on top of the game, as it takes only a second to score from a set piece situation.

Questions about Edmonton vs York United 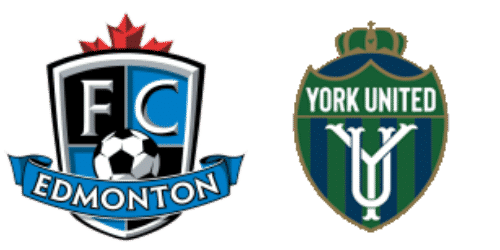 Where is the match scheduled? IG Field in Winnipeg

Which team is the favorite to win? York United