DC United will go up against New York City on the 3rd of April and we will cover the match and reveal everything you need to know about it. If you want to see more MLS predictions and betting picks, check out our website.

After going over the DC United vs Atlanta United fixture, we came up with the following free betting picks and predictions for Sunday. Remember that the BetMGM odds for the match are always subject to change, so make sure you double-check them before you place any wagers.

Recent Lineup Information About the Match This Weekend

Here, you can check out all the recent player injury information.

DC United doesn’t have any injured or suspended players, so they will be facing their opponents at 100% this weekend.

A total of five players won’t make it to play against DC United this weekend because of various reasons. Four of them are injured – Machop Chol, Emerson Hyndman, Luiz Araujo, and Franco Ibarra. Only Dom Dwyer is out with a red card suspension.

These tables are full of the most recent match histories for DC United and Atlanta United, including the top odds from bookmakers & head-to-head data.

DC United managed to surprise us at the beginning of the season with two wins in a row, but after that their next games were lost. Atlanta United not only has a better form compared to their rivals, but they also have a pretty solid head-to-head advantage against DC United. 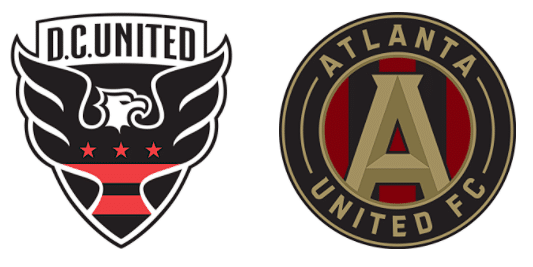 Common Queries Regarding the Upcoming Match