Will what is considered a sure win for Club America turn into chaos this Wednesday? Stay tuned to find out what our experts think.

Check out this information, supplied by our soccer experts, for valuable stats about the upcoming game. For more expert Liga MX picks, please visit our dedicated page.

Currently ranked first Club America enter the game as the big favorite to win this game. They have been simply outstanding this entire season with only 1 loss in 13 games so far! The home team has one of the highest-scoring attacks in the League and one of the best defenses. Their opponent on the other hand is really struggling thing season to get victories. They are the team with the most draws this season – a total of 7 with 2 losses and 3 victories to go with it, earning them the 10th position in the table. The last 5 games between the two teams ended in 2 victories for Club America, 2 ties, and only 1 loss.

In the last 10 games between these 2 opponents, 7 ended in both teams scoring.  Many of them ended in Santos Laguna scoring only 1. The reason behind such a bet will be the current form that Club America is displaying and the outstanding performances by Guillermo Ochoa. The captain of Club America has been a rock this season conceding only 7 goals in the League. In the last 5 games, Club America conceded only 2 goals.

Those are the key head-to-head statistics and odds for Club America vs Santos Laguna match:

Considering the facts surrounding this derby game we can with big certainty conclude that a 1:0 or 2:0 victory for Club America is the logical way to go. The host team is showing tremendous momentum in their play – they score with ease, they do not break in defense and their opponent doesn’t seem to have the class to overcome such a fierce rival. Club America’s coach knows that a victory today might make the club untouchable on the top of the table and a comfortable result is exactly what he will be looking for. 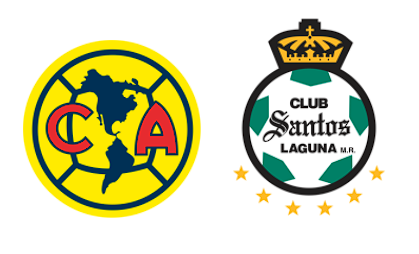 Questions and answers for the Club America vs Santos Laguna game: