Buckle up, because the 10th Liga MX round will bring us the ultimate clash of the Mexican football scene. The greatest rivalry known as El Super Clasico has come to the 2021 Apertura and Club America will be hosting the match.

Here is our team of experts' selection of free predictions:

The odds are true at the time of writing. However, we advise you to always check your bet slip before finalizing your bet as the odds can change at all times.  Our recommended bookmaker for this match is BetMGM.

The current league leaders and the most successful side in Liga MX's history – America, seem to be in a good position going into the game vs Chivas. In their last 10, the hosts have lost only 1 – their most recent match vs Toluca, while winning 8. For comparison, Guadalajara has had just 4 victories in its match history. Head-to-head the advantage is once again in America's favor – the club has won 5 of their last 10 meetings, and Chivas has been victorious three times. However, bet on this game with caution – this is a heated derby and things can become very hard to predict very quickly.

Head-to-head, the BTTS – No result is hanging in the balance, manifesting in 50% of their most recent meetings. The overall statistics point in the direction of both teams not finding the net. As hosts Club America have conceded just a single goal in 4 games. What's more interesting is that Guadalajara has conceded 8 goals in total during the campaign, and none of them were when playing on the road. In 4 games as visitors, Chivas has kept a clean sheet.

With both sides' defenses seeming so on point, it's hard to believe that we will see 3 or more goals scored in this tie. This has occurred in 25% of America's games at home and 0% of Guadalajara's games on the road. Head-to-head, 6 of their last 10 matches also featured less than 3 goals.

Club America vs Guadalajara: The latest stats and selection of the best odds

All of the above are nicknames that the Mexican football fans have given to this matchup. Club America and Chivas Guadalajara are historically the two most successful Liga MX clubs, and their legacy won’t be short-lived. The tickets for this such a tie get sold out in minutes and the stadiums reach their full capacity every time. Even if you aren’t a fan of the Mexican top-flight, you could rate the greatness that engulfs this matchup. 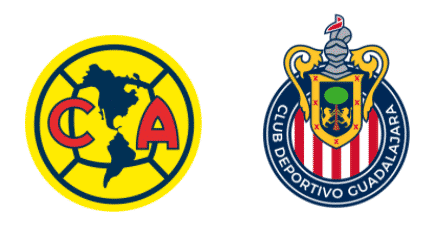