Let's check out the MLS fixture between Cincinnati and SJ Earthquakes. If you don't like our suggestions, or you want more MLS betting picks to choose from, you can head over to our website.

Below, you can check out what we came up with in terms of betting picks when it comes to the Cincinnati vs SJ Earthquakes match. All odds are from BetMGM and are subject to change, so make sure to double-check them before finalizing.

Two of the last three games for SJ Earthquakes and three of the last five matches for Cincinnati had one thing in common – they ended with fewer than 2.5 total goals scored. We believe that Sunday's game will also end that way, especially seeing that their first and only head-to-head games ended with only one goal scored back in 2019.

Here, you can check out the most recent lineups and injuries for both teams before their upcoming game tomorrow.

Cincinnati doesn't have any suspended players but Kenneth Vermeer, Ronald Matarrita, and Sunderland Beckham are all out with injuries right now. We don't know when exactly they will be coming back.

Ousseni Bouda, Gilbert Fuentes, and Casey Walls are all out with injuries right now, so they won't make it on Sunday to the game against Cincinnati. There are no suspensions on the squad right now.

Here, you can check out the latest statistics and histories for both teams before the upcoming game.

Neither SJ Earthquakes nor Cincinnati is in a good form right now and that shows in their recent results. We believe that Sunday's game will end with fewer than 2.5 total goals scored but maybe we will see goals from both sides, too. A draw isn't unlikely and Cincinnati already had a lot of them recently. 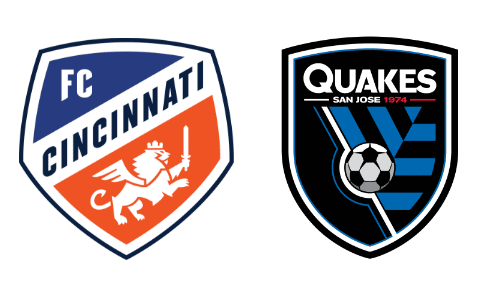