The United States has one of the most successful women’s soccer teams in the business. Since the inception of the Women’s World Cup in 1991, the United States women’s soccer team has been able to claim the coveted trophy on four occasions, which is a record. Germany are the second most successful team but they have managed only half of the success achieved by the USA. It is remarkable that the United States women's national soccer team (USWNT) has not finished lower than third in any tournament so far. Over the years, the team has been able to post some incredible performances. It is essential to rank the best US women's soccer teams in order of their merit. 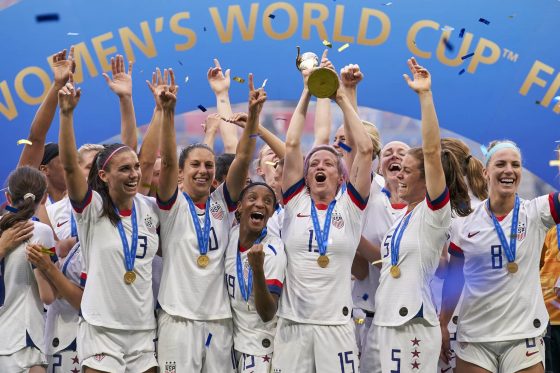 This would rank as one of the best US women's soccer teams that the United States has produced. Even though manager Jill Ellis tried to go with a conservative approach, it was quite hard to do with the firepower that consisted of Sam Mewis, Lindsay Horan, and Lavelle. The trio made the midfield extremely dangerous, while they had Crystal Dunn making up the runs to be at the end of the chances. This team also managed to feature players from two different generations. Rapinoe was one of the stars of the tournament 33 years of age, but there were also younger generation names like Dunn and Lavelle at 26 and 24 respectively. The United States completely controlled the tournament and it is clearly one of the finest teams produced.

The US national team was easily the most successful during the 90s decade. Hence, it was a fitting finale to the team that managed to dominate the 1991 World Cup, pick up the Olympic gold medal in 1996, and wrestle back the World Cup title in 1999. The team made light work of all the opponents in the tournament and only tested in a handful of matches like the game against Germany in the quarter-finals. Even though it took the team penalties to overcome China, Tony DiCicco’s has been able to create a fitting memory as one of the best US women's soccer teams.

Jill Ellis was once again at the helm of the USWNT for this tournament. After having watched Germany dominate the pitch for more than a decade, the USWNT was once again back at the top after managing to overcome Japan with ease. The team had a lot of athleticism and it allowed the manager to go with a counter-attacking style which was frightening for the opposition. Many of the players ended up peaking towards the latter stages. The team was so dominant that Japan were 4-0 down after just 16 minutes in the final.

This is one of the best US women's soccer teams that featured many of the stars from the 1999 World Cup. However, a majority of them – Scurry, Lilly, Foudy, Hamm, and Fawcett – were in the 30s. It appeared to make a lot of sense initially, but they were clearly past their prime. Even though April Heinrichs tried to work around the age factor with a lot of magic, it was ultimately failed attempt to inspire the 1999 win. On home soil, the team would finish in the third place. Yet, this team still holds a special place thanks to the incredibly talented players who had only suffered a single defeat – against champions Germany – throughout the tournament.

This was the inaugural World Cup for women’s soccer and it was a relative unknown back in 1991. It was the sequence to the trial tournament that was held a few years earlier. After having lost in the quarter-finals during the trial tournament, USWNT took a young team to the tournament and ended up being successful. Even though many of the youngsters part in the 1991 World Cup had previously played in the trial tournament, they were coming to the peak of their powers. Some of the best examples would be Lilly, Fawcett, Foudy, and Akers. One of the few reasons for this team dropping down this ranking would be the level of competitiveness seen in 1991. Back then, the US were in a much better position compared to other countries and they had a slender advantage as a result. The success of this best US women's soccer teams ultimately paved the way for the formation of the USWNT. You could say fantasy football became a reality!

The 2011 World Cup would rank as one of the tournaments where the USWNT failed to pick up the trophy. The team came very close to the first major success of the century as they would ultimately be beaten by Japan on penalties. Pia Sundhage’s team had a number of moments during the tournament that made for a spectacular watch. The team had a remarkable comeback against Brazil in the quarter-finals, which they would win by penalties. The team, however, failed to dominate most of the tournament. The squad was ageing but they still managed a runner up position. It is still remarkable that Krieger players in the squad to provide answers for forthcoming world cups.

The USWNT team of 2007 is also one that did not manage to succeed at the World Cup. The USWNT team of 2007 managed a third-place finish after beating Norway. The tournament produced one of the popular losses for the national team. Manager Greg Ryan was culpable of making some bad mistakes like the decision to go with Scurry rather than Hope Solo in the semifinals. The result of this World Cup was one of the factors that accelerated the need to find a replacement for the ageing squad. After having fallen short in the 2003 World Cup, it was a desperate failure for the national team that many youngsters like Chalupny and Lloyd were unable to make an impact. The US would go on to more World Cup failures before winning the tournament only in 2015.