Let's check out one of the last MLS fixtures this season between Austin and Orlando City to see if we can predict the top three free betting picks and lines for Monday. For more MLS betting picks, you can check out our website.

Here are the top free betting picks and predictions for the Austin vs Orlando City fixture this weekend. These odds are all from BetMGM and are subject to change. Before wagering, you should double-check your bet slip for the latest odds.

It's likely that there will be more than 2.5 total goals scored during the first head-to-head game between Austin and Orlando City. We saw the same thing happen in eight of the twelve matches for Austin this season and three of the last five games for Orlando City.

Both teams have the exact same recent form with three wins and two losses in the last five matches they played. We think that the winner will most likely be Austin because they have played better overall during the season and have a three-point advantage compared to Orlando City even though they are in different tables. Austin will also host the match, which gives them even more of an advantage.

Injuries and Suspensions for Austin vs Orlando City on Monday

Here, you can check out the most recent player injuries and suspensions before the MLS game next week.

Austin doesn't have any suspensions, but one of their players was injured at the beginning of May – Brad Stuver.

There is only one injured player from Orlando City and no suspensions at this time. Carlos Antonio was injured at the beginning of April and is still out.

These are the most recent match statistics and bookie odds for the Austin vs Orlando City MLS fixture.

Fixture Preview for Austin vs Orlando City on Monday

Orlando City isn't that bad and they are keeping the second position filled alongside a few other teams in the Eastern Conference, but Austin is currently sharing the first position in the Western Conference with one other team. We think that Austin's better performance and the fact that they will host the game are key to their win on Monday. Also, we think there will be more than 2.5 total goals scored during the game. 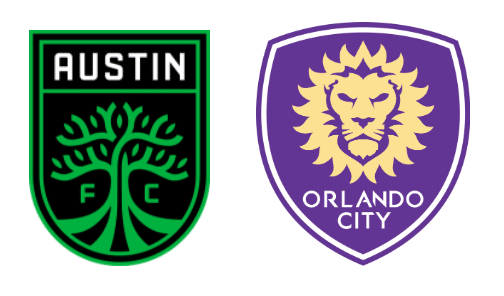 Popular Questions & Answers About Austin vs Orlando City on Monday