Let's go over the Austin vs Minnesota Utd fixture to find the top free picks, lines, and odds for the event. If you want to see more MLS betting picks, you can check out our website.

We went through the match data and came up with these free betting picks for the match this weekend. You can also see the best odds and predictions below.

All odds are from our recommended bookmaker for this match – BetMGM. Before betting, make sure to double-check all odds via your bet slip.

We don't believe that both teams will score during Sunday's match between Austin and Minnesota Utd. That's because all of the matches they played against each other ended with clean sheets. Also, three of the last five fixtures for Minnesota Utd and two of the last three matches for Austin ended the same way.

Austin's attempt to turn their luck around didn't go as planned because they still lost three of the last five matches they played. Minnesota Utd didn't have that much luck and so many of their players are out, so their recent form consists of two losses. We would choose Minnesota Utd as the favorite because they showed that they could beat Austin earlier this year in June, which was their last head-to-head fixture.

This season both Austin and Minnesota Utd have had more games with a final score of under 2.5 total goals. Another fact that supports this theory is that Austin and Minnesota Utd's only two head-to-head matches ended with under 2.5 total goals. We believe that the recent matches both teams played are a fluke and there won't be that many goals scored on Sunday.

Check out these match statistics and data for the upcoming Austin vs Minnesota Utd match on Sunday.

Austin has several injured players and some of them have been out for a while, so even with two wins in the last five matches they played, we don't think they can beat a team, which is thirteen points ahead of them at this stage.

Minnesota Utd doesn't have any injured or suspended players, but they will still have a few missing ones for the match on Sunday because of national selection. A total of six players from Australia, Canada, Finland, and Madagascar will miss the MLS match against Austin. 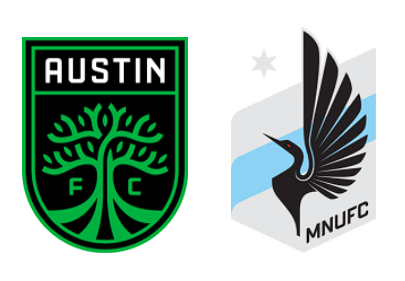