Austin will be facing Inter Miami on the 6th of March, and in this article, you will be able to find the top predictions and betting picks for their game this weekend. If you want to see more MLS predictions and odds, you can check out our website.

Below, you can see the latest betting picks and lines for the upcoming Austin vs Inter Miami match on Sunday. These odds are from BetMGM and are subject to change. This means that you should double-check your bet slip for the latest odds before continuing.

Three of the last five matches for both Inter Miami and Austin ended without both teams scoring goals. It's safe to say that only one team will most likely score during the match.

Austin has been in a better recent form compared to Inter Miami and we think that they have a better chance of winning this match. Austin won their first MLS match of the season, while Inter Miami drew their first game, so far. These two haven't played together, yet, but Austin FC's home record has been better with only one loss at home in the last five matches played. Inter Miami suffered three away losses out of their last five matches.

Here are all the players that won't be able to make it to the game this weekend for some reason.

Austin FC doesn't have any injured or suspended players that we know of, for now, so they will be facing Inter Miami at 100%.

Inter Miami has currently three injured players and all of them have been out since last year – Joevin Jones, Victor Ulloa, and Kieran Gibbs. There are no suspensions at this time.

In these tables, you can check out the latest Austin vs Inter Miami match histories and recent scores for their match on Sunday.

This will be the first game between Austin and Inter Miami, and we think that Austin is in a better form to face their opponents. Also, they will be facing them with a full squad, while Inter Miami won't be at full strength this weekend. 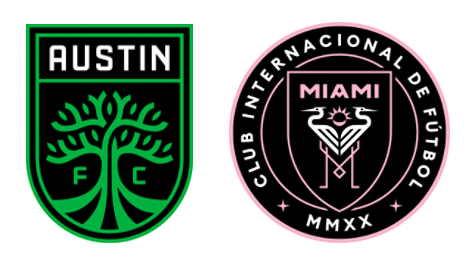 Essential FAQs Regarding the Fixture on Sunday