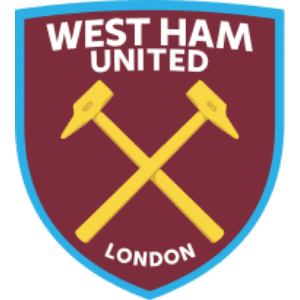 West Ham United FC are an English football team that currently play in the English Premier League. They play their home games at the London Stadium in Stratford, having moved there from the Boleyn Ground at the beginning of the 2016/17 season. West Ham play in claret and blue, and they're also known as the Irons or the Hammers. The East London club are currently managed by David Moyes and are famed for their commitment to youth development, earning them the informal moniker, ‘The Academy of Football'.

West Ham United Football Club is one of many professional clubs from London.

West Ham United was founded in 1895. At first they were called Thames Ironworks before changing their name to West Ham United in 1900. The club joined the Football League in 1919 and they were the losing finalist in the first-ever FA Cup Final in the same year. However, they have managed to win this prestigious competition three times.

In the top flight of English football, West Ham was never that successful. They never won the league and their highest finish was third in 1985/1986 season. Despite this, they’ve had some success in Europe since they’ve played in two European Cup Winners' Cup Finals, winning the trophy in 1965 and losing in 1976. They are currently competing in the Premier League and their current manager is David Moyes.

Sébastien Haller from Eintracht Frankfurt for £45m in 2019

The most expensive signing in West Ham’s history, Haller was bought for a reported fee of around £45 million in 2019. The French striker had a great season at Frankfurt and was hoping to replicate his success in the Premier League. So far, he showed a bit of his talent but he is still far away from justifying his price tag.

Dimitri Payet from Olympique Marseille for £10.5m in 2015

Although Payet was at the club for just 2 seasons, he became a fan favourite as soon as he stepped on the pitch. His creativity and flair made the French midfielder an instant legend, until his unpleasant departure in 2017. After stating his desire to move from the club, he went back to Marseille for a fee of £25 million, which is still the record sale for West Ham.

The fee paid for Felipe Anderson was the record for West Ham at the time, latter surprised by the transfer of Haller. Anderson arrived with great expectations and his first season at the club was quite successful. However, his second season was forgettable and he was sent to Porto on a loan in 2020.

Another record-breaking transfer for West Ham at the time, the fee paid for the Austrian striker proved to be worth it for the Hammers. Arnautović scored 21 goals for the club in his two seasons with the team but the allure of Chinese money made him want to leave the club. He left in 2019 for a fee of £22.5 million.

After prolonged negotiations over the transfer fee, Matthew Upson joined West Ham for a total of £7.5 million on the last day of the 2007 winter transfer window. Upson spent 4 years at the club, during which time the defender played in 131 league games for West Ham.