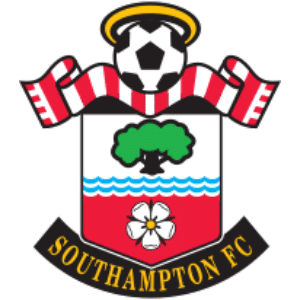 Southampton FC are a football team that play in the English Premier League. The club is nicknamed the Saints and they play their home games at St Mary's Stadium, having moved there from The Dell in 2001. They play in a white and red striped home kit. Ralph Hasenhüttl is the current manager of the side. Southampton were one of the 22 founding members of the Premier League. The club narrowly avoided relegation in 1996 and 1999 but were relegated to the second tier of English football in 2005 for the first time in 27 years. They returned seven years later as Championship runners-up.

Southampton Football Club is a professional football team from Southampton, England. The club was created in 1885 and immediately given the nickname “The Saints” because of their history as a church football team that was first called St. Mary’s Church of England Young Men’s Association. Southampton played its home games at The Dell before moving to St Mary’s Stadium in 2001.

Even though The Saints have a long history, they failed to win a title in the top flight of English football. They came close to this feat in the 1983-1984 season but they finished second in the end, three points behind champions Liverpool. However, Southampton’s trophy room is not empty – they won the FA Cup in 1976 and played in a few more finals of the FA Cup and the League Cup.

Southampton’s main rivals are Portsmouth and matches between these clubs are known as the South Coast Derby. The club has been a constant member of the Premier League since 2012 and their current manager is Ralph Hasenhüttl.

You can find out more about Southampton transfer news and follow current transfer rumours and gossip on our website.

Although he spent just two years at Southampton, the Senegalese winger proved to be a very good piece of business for the club. During his stint with The Saints, Mané scored 21 goals and helped Southampton establish themselves as a perennial Premier League club. He was sold to Liverpool in 2016 for a fee of £34 million.

Rickie Lambert from Bristol Rovers for £1m in 2009

When Rickie Lambert came to Southampton, the team was just relegated to League One. Although the fee of £1 million is not cheap for a team in a third-tier competition, it was not a huge risk for the club. And, more importantly, the move paid off handsomely. Lambert stayed with the club for 5 years and helped the team gain promotion to both Championship and Premier League, scoring over 100 league goals in the process.

Jannik Vestergaard from Borussia Mönchengladbach for £22m in 2018

The Danish central defender is the most expensive signing in Southampton’s history. Since his arrival in 2018, Vestergaard has become a standard part of the team, although he had to fight for his spot and didn’t play in all games for The Saints. But he’s proven his worth and he seems irreplaceable in 2020.

James Beattie from Blackburn Rovers for £1m in 1998

James Bettie arrived at Southampton without any big expectations, as a part of a deal that took Kevin Davis to Blackburn. However, Bettie quickly proved that he is worth more than anybody imagined and ended up spending seven years at the club and scoring 68 goals in the league for Southampton.

Southampton garnered a reputation as smart businessmen by selling players for much larger fees than what they paid. But perhaps the best piece of business for the club was getting Virgil van Dijk from Celtic for £14 million and then selling him to Liverpool for £75 million after two and a half years at the club.