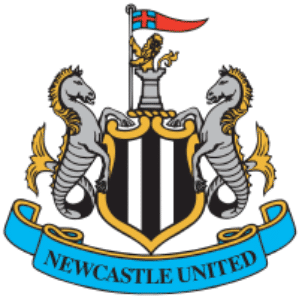 Newcastle United is considered one of the biggest clubs in England, partially down to their large fan base and loyal support. Founded in 1892 when two clubs merged to form Newcastle United. They currently play in the English Premier League under manager . Traditionally the Magpies play in a black and white striped kit for the home matches at St. James Park. Their biggest derby is Sunderland in what is called the Tyne-Wear derby. They have recently bounced between the Premier League and Championship, winning the Championship title in May 2017.

Newcastle United Football Club, the so-called Magpies, is a professional football club from Newcastle upon Tyne. The club was founded by the merger of two local clubs in 1892 and plays its games at St. James’ Park since the very start; although the stadium had to be reconstructed in the 90s and can now host a crowd of 52,305 people.

Newcastle United has 4 domestic titles in the top flight of the English football, although their last title came all the way back in 1927. The club has also won 6 FA Cup trophies and had some rather successful runs in Europe as well. They have been a member of the top flight of English football for 88 seasons and never dropped below the second-tier league in their history.

This club has competed in the Premier League almost all the time since the league’s foundation, only spending three seasons out of the league. The current manager of Newcastle United is Steve Bruce.

If you want to know more about Newcastle transfer news and stay up to date with the latest transfer gossip and rumours, check our website out for fresh information.

Alan Shearer from Blackburn Rovers for £15m in 1996

Newcastle United made serious headlines after this transfer was announced. Alan Shearer was, at the time, one of the most sought after players and he was a part of Blackburn’s inspiring title run. So, it was quite surprising when Newcastle bought him for a then-record fee of £15. Shearer spent 10 years at the club and he is still the player with most goals scored in the Premier League with 260 goals.

Fabricio Coloccini from Deportivo La Coruña for £10m in 2008

Coloccini was already an established name when he came to Newcastle in 2008 but many were still surprised that the club decided to pay £10 million for him. However, the move paid off since the Argentinian defender spent eight years at the club and became a true fan favourite.

After an unimpressive stint with Real Madrid, Michael Owen came back to the England where he had his most successful years with Liverpool. His arrival at Newcastle United was euphoric since the club splashed out a record transfer fee for him. However, Owen struggled with injuries and he only scored 26 league goals for the club during the 4 years at Newcastle.

The Spaniard came to Newcastle for a bargain fee of just £1 million but he quickly proved just how good he is. He was one of the club’s top goalscorers during his 5 years at the club, despite playing mostly as a winger. In 2019, he was sold to Leicester City for £30 million.

Joelinton broke the record for Newcastle when he was signed for £40 million in 2019. The Brazilian striker was relatively successful in Germany, although the transfer did raise many eyebrows. So far, the sceptics seem to be right since Joelinton has only scored two league goals for Newcastle United in 45 games.