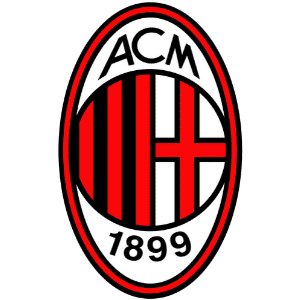 AC Milan are an Italian football club based in Milan and founded in 1899. The Rossoneri are currently managed by and play in Italian Serie A. Milan play their home games at the San Siro, sharing with city rivals Inter. Former owner and Italian prime minister, Silvio Berlusconi, was in charge for more than 30 years, turning Milan into one of the richest clubs in world football. They have spent just two seasons outside of Italy’s top flight, in 1980/81 and 1982/83.

A.C. Milan, or simply Milan, is a professional football club from Milan, Italy. It was founded at the turn of the century, in 1899 and became one of the most popular and most decorated football clubs in the world. Since 1926, Milan has hosted other clubs at San Siro, or Stadio Giuseppe Meazza, as it is officially known. A.C. Milan shares the stadium with another famous club from Milan, Internazionale. Their matches are known as Derby Della Madonnina.

This club is one of the most successful teams in Italy – they’ve won 18 league titles and 5 Italian Cups. In addition to this, AC Milan has 7 European Cup/Champions League titles, which is more than any other Italian club and only behind Real Madrid in entire Europe.

Unfortunately for their fans, Rossoneri have won their last European title in 2007 and their last Serie A title in 2011. In the past decade, they’ve struggled to stay on top but the club seems to be on track to get back there soon enough. Their current manager is Stefano Pioli.

Stay up to date with the latest Milan transfer news, gossip and rumours on our website.

Zlatan Ibrahimović from Barcelona for £22m in 2011

A perennial journeyman, Ibrahimović moved from one top European club to another in his career, leaving his mark everywhere he went. And while he only spent two seasons at Milan, he scored 42 goals and spurred his team to first Serie A title since 2004. His impact was so big that Milan brought him back in 2020 even though he is almost 40 years old – and he is currently first on the list of Serie A top goalscorers.

Shevchenko is an absolute legend at AC Milan, for a good reason. He was bought in 1999 for a then-record fee of around £21.5 million and he spent seven seasons with Rossoneri, scoring 127 league goals in that time. He was eventually sold to Chelsea for a fee of around £30 million, a record transfer by an English club at that time.

Ricardo Izecson dos Santos Leite, best known simply as Kaká, arrived at San Siro for a modest fee of around £7.5 million. The Brazilian winger spent six seasons at the club, winning both Serie A and Champions League with Milan. In 2009, he was sold to Real Madrid for £60 million, which is still the highest fee that Milan received for a player.

When “Pippo” Inzaghi arrived at San Siro, he was already an established striker who scored 57 league goals with Juventus in Serie A. The deal included Cristian Zenoni going the other way, plus cash, which is why reports of the total transfer fee vary from one source to another. In any case, Filippo Inzaghi remained at Milan for 11 seasons until his eventual retirement.

The highest-paid transfer fee in Milan’s history is for Italian central defender Leonardo Bonucci. He arrived at Milan for a fee of around £37.8 million but he only spent one season with the club before going back to Juventus for a fee of £31.5 million.