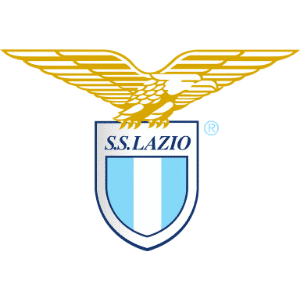 Società Sportiva Lazio, simply called Lazio by football fans, is a professional Italian team based in Rome. The club was established in 1900 and spent most of its history in the top flight of Italian football. Their home, which they share with their city rivals A.S. Roma, is the infamous Stadio Olimpico with the capacity of 70,634 seats.

The Biancocelesti didn’t have much success in their early years, apart from competing on the highest level of Italian football. Their first major success came in 1958 when Lazio won its first domestic cup out of their 7 total Coppa Italia trophies. Their first league title came in 1974 but their most successful years were during the 1990s when Serie A was the richest league in Europe. Lazio won another Serie A title in 2000, as well the UEFA Cup Winners’ Cup in 1999. They’ve also reached UEFA Cup final in 1998.

In the 21st century, Lazio started to decline financially and they’ve failed to achieve any success in Serie A, although they were successful in the Cup during those years. Their current manager is Simone Inzaghi, a renowned Italian striker who spent 11 years at the club during his playing career.

Find all the current Lazio transfer news on our website and keep up to date with the latest gossip and rumours.

Although Vieri didn’t spend much time at Lazio, the high fee paid to Atlético Madrid turned out to be more than justified. After just one year with the Biancocelesti in which he scored 12 league goals in 22 matches, Vieri was sold to Inter Milan for a fee of around £42 million. This is still the highest fee that Lazio received for any player.

Meanwhile, the highest fee that Lazio paid for a player is £51 million they splashed to bring Crespo from Parma. However, Crespo also didn’t spend much time with the club since he was sold to Inter for a fee of around £32 million (£25 million plus Bernardo Corradi). Still, Crespo was very efficient at Lazio, scoring 39 goals in 54 Serie A games.

Riding high on his performances for Chile in the World Cup, Salas saw his price rise and garnered a lot of interest from Europe. He ended up at Lazio and it turned out to be a great fit for the striker. Salas spent three years at the club before being sold to Juventus for £22.5 million.

The signing of Pavel Nedved for a modest price of £1.2 million turned out to be a brilliant move by Lazio. The Czech midfielder played for Lazio for 5 years, helping the team to their 1999/2000 Serie A title. He was eventually sold to Juventus for £40.5 million, which is the second-highest fee that the team ever received.

Ciro Immobile had a lot of potential but he struggled for a while to fulfil it – especially since leaving Italy to play in Germany and Spain. His signing for Lazio was a masterstroke by the club, especially for a price of £8.5 million. Immobile became a true star in the league, leading Lazio back to Champions League and topping the Serie A goalscoring list two times in his four years at the club.

Not a Kepa: Who should Chelsea sign as their new No.1?