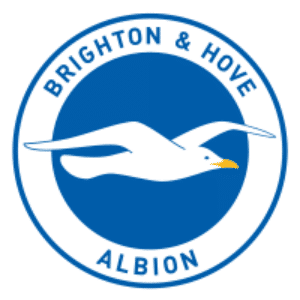 Brighton & Hove Albion FC, or simply Brighton, is an English professional club from the city of Brighton and Hove. This football club was founded in 1901 but the club’s long-standing history wasn’t filled with much success. Their only major trophy to date for Brighton is the FA Charity Shield won back in 1910 against Aston Villa.

This club is also known for bringing the famous manager Brian Clough to lead the team in 1973 while they were still in Division Three. Clough remained at the club only for a year but the move signalled a turn for the club and they have earned a promotion to the top flight in 1979. However, they were relegated again in 1982, in the same season in which they played in their only FA Cup final.

Brighton spent most of its time in lower leagues until 2017, when they managed to earn a promotion to the Premier League for the first time. The club’s current manager is Graham Potter. Brighton FC plays its games at the Falmer Stadium, the club’s third home ground in history.

Learn all about Brighton transfer news, gossip and rumours on our website.

Glenn Murray has spent three years at Brighton after arriving from Rochdale but that was not his only stint with the club. He left for Crystal Palace in 2011 but came back to Brighton in 2016 and has been with the club ever since, scoring important goals for his team in Brighton’s inaugural season in the Premier League.

Zamora is one of the most prolific strikers in English football and a true legend at a few different clubs. After spending three successful years at Brighton where he even earned a song from the fans, he was sold to Tottenham for £1.5 million.

The Colombian winger arrived at Brighton in 2017 for a then-record fee of £14 million. He was bought to help the club in the fight against relegation and he managed to stay in the Premier League with Brighton ever since.

Another important addition in the team’s first Premier League season, the Australian goalkeeper quickly became a fan favourite at Falmer Stadium. He is still with the club and firmly holds his spot in the goal, helping to cement Brighton as a stable Premier League team.

One of the biggest transfers in the club’s history was the fee of £18 million that Brighton paid in 2019 to bring Leandro Trossard. The Belgian winger quickly settled in and proved a valuable signing in his first season with the club.

The current record-holder when it comes to Brighton transfers is Neal Maupay, a French striker who came to the club after proving himself in the Championship with Brentford. Maupay scored 10 goals in the Premier League during his first season at Brighton.

Graham Potter: Producing Magic with the Seagulls and destined for bigger things

Honeymoon over but Pearson can enjoy long & happy Watford marriage

Taking the plunge on Dunk could sink Chelsea youngsters

The present every Premier League team needs this Christmas

Einsteins Everton must reverse trend and stick with Silva

£50m ‘bargain’ Moussa Dembélé is made for the Premier League

An expensive gamble but Söyüncü could solve City’s defensive crisis