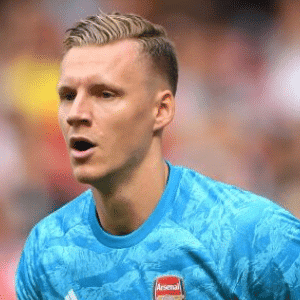 Bernd Leno, born 4 March 1992, is a German footballer who plays as a goalkeeper for Arsenal . Leno was a product of the VFB Stuttgart academy but failed to make his debut for the club before joining Leverkusen on loan in 2011. He made his debut for Leverkusen against Werder Bremen and went on to keep clean sheets in his first three Bundesliga matches. Leverkusen made the transfer permanent on 30 November 2011 when they paid Stuttgart £6 million and Leno signed a deal to keep with him Bayer until 2017. Leno became a regular in the first team and after a string of impressive performances, on 8 November 2013, he signed an improved contract to keep him at the club until 2018.