Once a player leaves Mo Salah.

So when Kurt Zouma joined Stoke City on a season-long loan in the summer, there may have been understandable fears the Frenchman wouldn’t be seen in a Chelsea shirt again.

During the 2016/17 campaign there was simply no space for him in the Blues' defence. The back three of César Azpilicueta, David Luiz and Gary Cahill were untouchable as Antonio Conte’s side won the league.

Zouma, who returned from a serious knee injury last season, needed game time. And that’s why he headed to the Potteries.

“This season it’s very important to play because after a really bad injury, it’s not simple – he broke his leg in a bad way,” said Conte in September.

“In every decision I make the decision with the club together and it’s important to know this, but in this specific case I think the best way for him is to send him on loan and play regularly.”

With Cahill struggling for form and Luiz now persona non grata after a falling out with Conte, Zouma’s performances at Stoke have given him a chance of returning to the first-team fold at Chelsea next season – just as Andreas Christensen has done this.

Zouma has impressed at the bet365 Stadium despite Stoke's poor form this season. The Potters are 19th and face a real fight to remain in the top flight.

And in November Ryan Shawcross hailed the 23-year-old's impact.

“He’s like the ultimate defender,” Shawcross said. “He’s quick, he can jump really high, he can pass the ball, he can shoot, he doesn’t get beaten one-versus-one.

“I think him and [Toby] Alderweireld are the top two centre halves in the country at the moment.”

Look at his statistics and it's clear Zouma has been the stand-out performer in the Stoke defence.

The Frenchman has won an impressive 78.45 per cent of his aerial duels, averaging 3.91 per 90 minutes.

Per 90, the Frenchman is averaging an impressive 2.08 interceptions and is making more passes than any of the other centre-back options with 33.34. His pass accuracy is also highest of the quartet at 78 per cent. 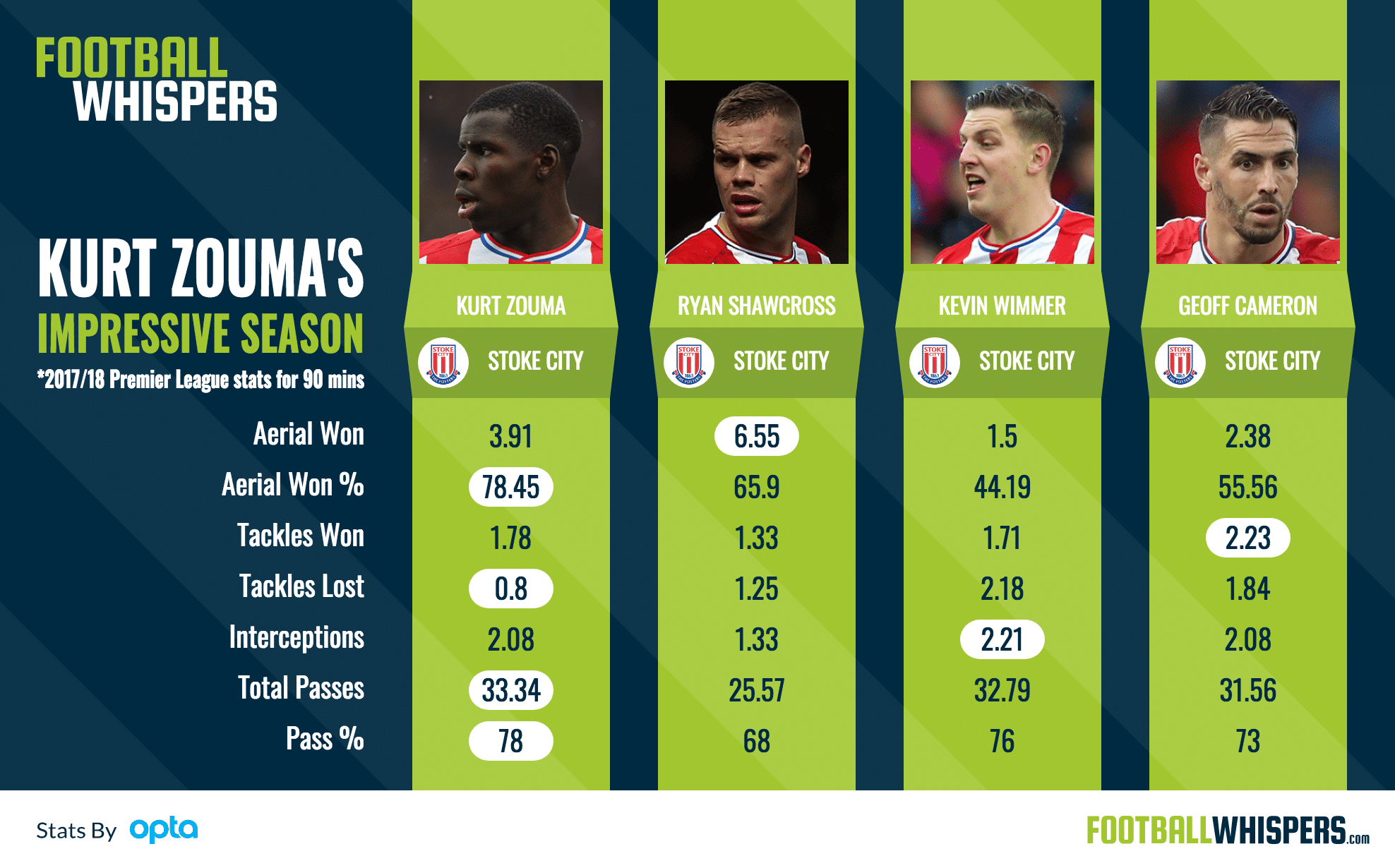 It’s no surprise he’s one of the first names on the team-sheet for Paul Lambert’s side, and that is with Stoke switching to a back four instead of playing the back three favoured by former boss Mark Hughes at the start of the season.

Defence may be an issue for the Potters – they've conceded the most goals in the Premier League – but that’s certainly not down to Zouma. He's been a shining light in a disappointing season in Staffordshire.

It would be no surprise to see Stoke try to keep him at the club in the summer, but that will only be possible if they remain in the Premier League.

Even then it would be a tough ask as Conte, or whoever is in charge at Chelsea next season, will surely be convinced that Zouma deserves another chance at Stamford Bridge.