There is a formidable aura surrounding Zlatan Ibrahimovic. For years the Swede has nurtured his iconic status with goals for big clubs in big games to win big trophies. He’s found the net, and won, with Ajax, Juventus, Inter Milan, Barcelona, AC Milan, and Paris Saint-Germain. His medal haul is impressive; his scoring record equally so. It’s understandable, then, that his injury in Manchester United's Europa League victory over Anderlecht caused some concern.

Falling awkwardly after an aerial challenge, Zlatan stayed on the ground for quite some time. Television replays showed in vividly grotesque detail the exact reason why the attacking behemoth lay on the floor. He was taken off immediately, and Jose Mourinho was unable to cover up his angst regarding the striker’s injury. “I want to wait but my feeling is not good,” the Portuguese told the press after the match, which Manchester United eventually won in extra time. “I want to wait and be optimistic but I am not.”

In truth, the manager’s reaction was a natural one in line with the general response of media and fans at the time. Zlatan has taken to life in the Premier League with typically iconic ease. He’s scored 17 goals and set up five in 28 league appearances, meaning he has had a direct hand in 44 per cent of his team’s league goals. He has acted as a talisman throughout, from his 83rd-minute winner on his debut against Leicester City to win the 2016 Community Shield to his 84th-minute equaliser to secure a point against Liverpool at Old Trafford.

In short, Zlatan’s aura has only been further cemented by his displays in English football, and his response to the injury was classically Zlatan. “I decide when it’s time to stop and nothing else,” read a post on his Instagram account. “Giving up is not an option. See you soon.”

First of all, thank you for all the support and love. Its no news I got injured so I will be out of fotball for a while. I will go through this like everythings else and come back even stronger. So far I played with one leg so it shouldn't be any problem. One thing is for sure, I decide when its time to stop and nothing else. Giving up is not an option. See you soon

The idea of being without their star striker for the crucial Premier League run-in is not an instantly appealing one for those involved with Manchester United. Yet, while the player’s record is excellent, his injury could act as a blessing in disguise.

Does the Zlatan dominance actually take away from the rest of the team?

During his time at Paris Saint-Germain, there was an argument that Zlatan, while scoring consistently and playing an obviously vital part in his team’s successes, took away from those around him, particularly attacking partner Edinson Cavani. This argument is not exclusive to the Swede – similar debates have been had surrounding many of football’s great finishers, and whether they enhance or reduce.

Ultimately, Cavani has thrived since Zlatan’s departure last summer, hitting a career-best league goals tally. This is perhaps more to do with the simple fact that the Uruguayan has taken centre stage this season, leading the line for PSG rather than being played out of position or taking on the role of support act.

However, while the notion that others can be overshadowed in Zlatan’s presence lacks substance, there is a more coherent argument to suggest that they can be under-utilised in an attack centred on the centre-forward. And, with this in mind, there are tactical reasons for optimism as Manchester United look to guarantee a top four finish and a return to Champions League football without their leading scorer’s presence.

Zlatan has been absent from Manchester United’s starting lineup on just five occasions in the Premier League in 2016-17. Of those five games, the team have won three and drawn two, scoring eight times and conceding twice. The only time Zlatan was left out by design rather than suspension or injury came in the recent 2-0 win over Chelsea, a match that showcased the possibilities of an attack without the Swede.

For that game, Mourinho fielded a front two of Jesse Lingard and Marcus Rashford in an attempt to out-pace Chelsea’s back line. Zlatan came on for the final seven minutes of the match, but by that point his team-mates had already asserted themselves and established a two-goal lead, with one goal coming from Rashford.

More recently, in Manchester United’s first league match post-Zlatan’s injury, Mourinho fielded a front line led by Anthony Martial away to a Burnley side who have often proved difficult to break down this season. Martial scored the first, set up the second for Wayne Rooney, and was a problem all afternoon with his pace and lateral movement across the attack.

Mourinho’s side have been held back by the frustrating recurrence of draws this term, none of which have been high-scoring. Indeed, of their 12 league draws, four have been stalemates and eight have ended 1-1. This hints at an inability to open up opposition sides, a potential failing also suggested by their having the worst scoring record – by quite some distance – in the top seven.

Manchester United have averaged 1.6 goals per game, but their average without Zlatan is 2 per game. While this should not discount the striker’s influence – or, indeed, his aura – it should provide hope to Mourinho that, evidently, there are other workable attacking combinations. 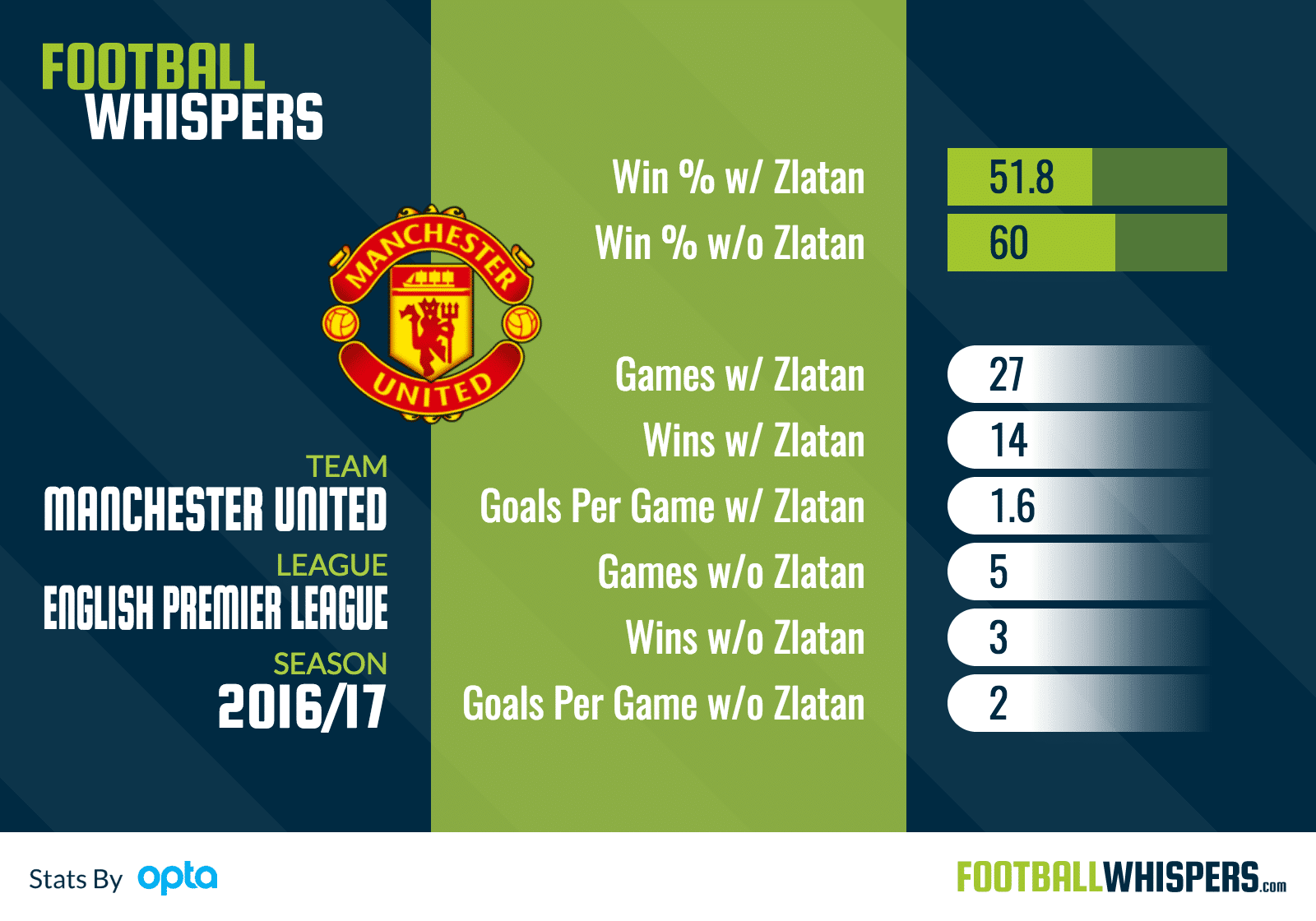 Time for Rashford and Martial to shine

The most obvious candidates to step in to the centre-forward role are Rashford and Martial. The former has scored three times in his last five outings, while the latter’s display against Burnley reminded all of his capability. Both possess a concoction of pace, directness, strength and skill that Zlatan, for all his refinement, audacity and efficiency, cannot offer. With either leading the line, Manchester United are likely to have an attack of greater movement and athleticism; they may not be quite so accurate, but they will be much more difficult to mark.

In addition, an attack without Zlatan, and with the greater movement and speed of Rashford or Martial, could enhance the creative inclinations of Mourinho’s many attack-minded midfielders. Juan Mata and Henrikh Mkhitaryan, who both like to drive at defences, will no longer find themselves colliding with the Swede in the process. And Pogba, whose passing range is exceptional, will have more runners in front of him to find.

Zlatan’s absence certainly isn’t to be celebrated. He has been an excellent leader from the front for Manchester United in his debut campaign of Premier League football. But without him, Mourinho need not shy away from the potential of a faster, more fluid attack.