West Ham United and Everton are the latest sides to be linked with the Morocco international, and with a World Cup approaching it might be good to get a bid in early in case his value rises during the tournament.

It’s for this reason that Ajax are also likely to want to wait until after the competition to consider any bids, but even a steep price rise may not deter those chasing his signature.

West Ham were also linked to the player during his time at FC Twente, prior to his move to current club Ajax, while Roma and Internazionale are long term admirers.

Who is Hakim Ziyech.

Ziyech came through the ranks at Dutch side Heerenveen making his debut in 2012 aged 19.

He went on to establish himself in the first team at the Eredivisie club before moving within the Netherlands, first to FC Twente and then to Ajax where he currently plays his football.

Though he was born in Dronten in the Netherlands, Ziyech chose to represent Morocco at national team level, much to the disappointment of Oranje legend Marco van Basten.

“Why had he not waited a moment, then he could now play for the Netherlands,” said Van Basten on Fox Sports.

“He was the perfect player for the Netherlands. His market value as an International player could have been much higher.

Morocco will appear in this summer’s World Cup in Russia, and though he has had some issues with Atlas Lions coach Hervé Renard, he has been present in the most recent squads and was part of their qualifying campaign.

Meanwhile, the Netherlands missed out on this World Cup, so maybe Ziyech made the right decision after all.

2016 – Marco van Basten to Hakim Ziyech: “How stupid can you be to choose Morocco if you are in contention for the Dutch national team?”

What are his strengths

“He creates in the literal sense of the word on the field. If Ziyech on the ball something is about to happen in a positive or negative way. Usually positive.”

He can make things happen in a number of ways. He's an excellent dribbler, and will look to advance with the ball before picking out a pass.

He leads the Eredivisie for assists, with 13, and though Ajax have been beaten to the title by an excellent PSV Eindhoven side, Ziyech has still been one of the stars of the Eredivisie this season.

The left-footed creative midfielder is used to playing in a typical Ajax 4-3-3 system as one of the advanced midfielders in the middle three.

He could perhaps play as one of the attacking trio out wide, but this would leave him with fewer options to unleash his main weapon – passing.

Pressing is also a requirement of many teams in the modern game, and he ticks the box marked ‘defending from the front' with no problems.

His play-making ability is of the highest standard, but it will be interesting how it transfers to a new league should he make a move this summer, as so far all his football has been played in the country of his birth.

Does he have weaknesses?

The 25-year-old’s main, and possibly only weakness for someone in his position is his long shooting, and the poor choices he makes in this area of the game.

As shown in the tweet below his shots are usually taken from positions where he isn’t expected to score, and he regularly doesn’t score.

One of these is Hakim Ziyech. The other is Andros Townsend.

Breaking shooting locations into xG buckets certainly adds some clarity about the quality of their chances. pic.twitter.com/7hs4g2zJv3

The comparison here is with Andros Townsend, but similar criticisms used to get thrown at Philippe Coutinho before he honed his shooting technique and grew into one of the best in the Premier League at scoring from outside the area.

With the right guidance Ziyech could go the same way as the Brazilian, and at 25 now is the time to do so. His next choice of club should be as much to do with the quality of coaching he’ll get there, as much as it is the wage and the profile of the club.

Ziyech is also regularly criticised for his demeanour on the pitch, but as long as he’s putting the effort in and producing when it matters, it is futile to point out such body language.

This type of disapproval is often aimed at Arsenal’s German creator Mesut Özil, but there’s no doubting his quality and the same can be said of Ziyech. 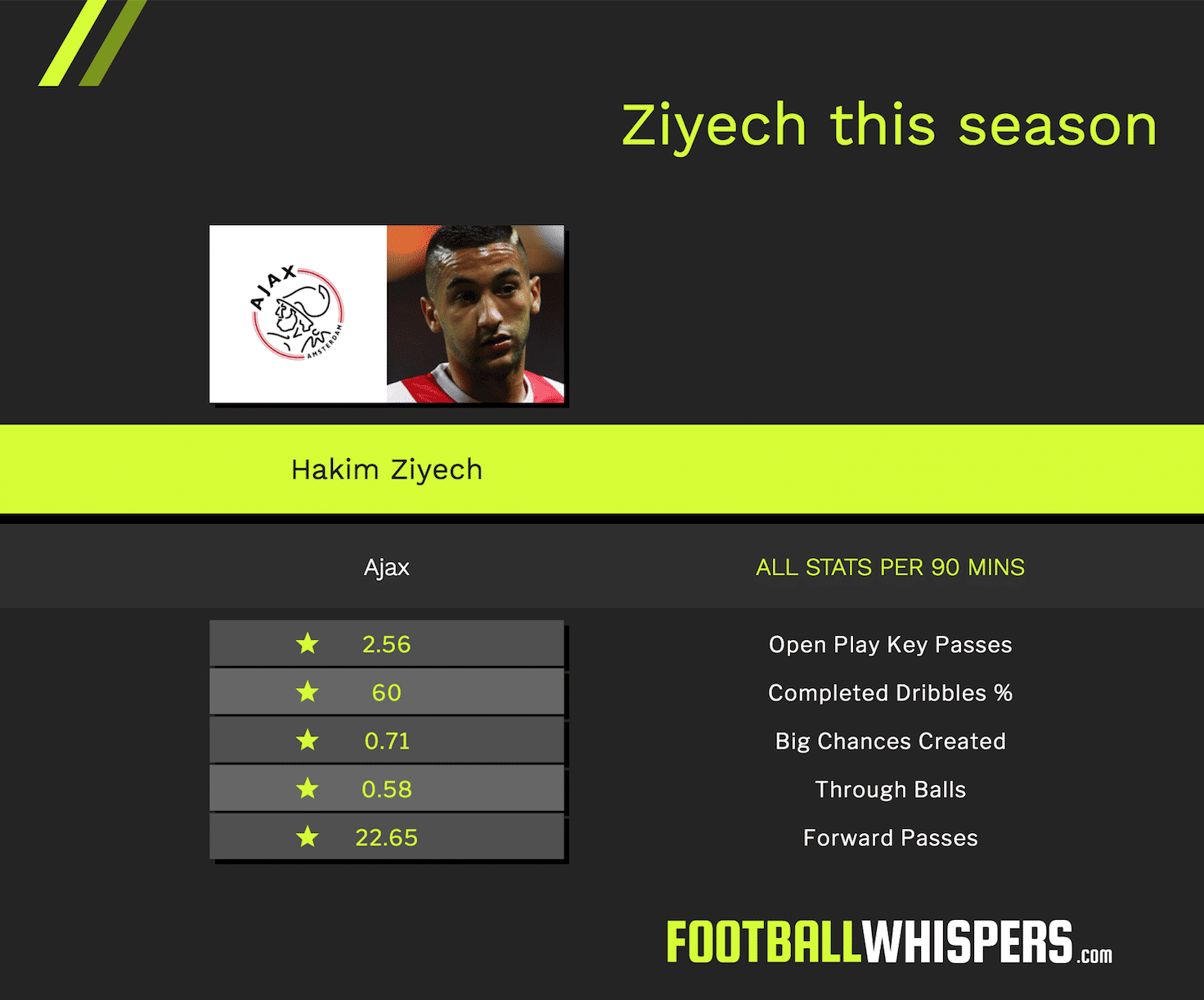 He also has a dribbling accuracy of 60 per cent, meaning he takes it past his opponent more often than he’s tackled by them.

These numbers reflect the strengths listed in the earlier section, and they match the eye test.

A fee of €15million is regularly put forward in the transfer rumour pages, and the player has indicated his desire to leave the club meaning that any reasonable offer should be accepted.

It may need something a bit higher than the number being touted, which is the equivalent of around £13million, but player the player and his agent will be determined to get a deal forced through this summer.

Why should he be signed?

He makes things happen, and should show this in the World Cup despite Morocco being drawn in a difficult group with Portugal and Spain, as well as Iran.

If a team wants to sign him they should get the deal wrapped up as soon as the current season ends. Wait until after the World Cup and they could be in a bidding war with a whole host of clubs across Europe.

If he could turn those misguided shots into goals, or into further assists for others, then he could be up there with the best in the world.