Hakim Ziyech isn’t Ajax’s biggest star but he could be their most in-demand one this summer.

The 26-year-old is believed to have a £25million release and after his stellar 2018/19 campaign, he’s the definition of a bargain. Recent reports have linked Liverpool, Manchester United, Arsenal, Tottenham Hotspur, Bayern Munich and Borussia Dortmund with the Moroccan playmaker, and that list is only going to grow.

Ziyech has been on the radar of top clubs across Europe since the 2015/16 season. The versatile attacker impressed for FC Twente, scoring 17 times and assisting a further 10 goals. It came as a surprise when he moved to Ajax, with many expecting him to move away from the Eredivisie.

Maybe clubs weren’t convinced he could cut it at the top just yet.

But since the move to the Johan Cruyff Arena, Ziyech has stepped up.

He’s scored 33 goals and assisted 40 times in three full seasons there. On average he’s involved in 24 Eredivisie goals per season.

But it was his performances in the Champions League during Ajax’s run to the semi-final which will have really impressed many of Europe’s elite.

He chipped in with three goals and three assists in 11 appearances. He was a livewire and a general nuisance in most games.

For example, his 0.73 big chances created per 90 can only be bettered by four players in the Champions League this term. He’s in the top three for dribbles attempted (5.66) and third for shots on a per 90 minute basis.

He creates. He can beat a man and there’s end product there. In terms of an attacking player, there isn’t much more he could do to tick the boxes. And, perhaps more importantly, Ziyech has shown he can perform on the biggest of big stages. 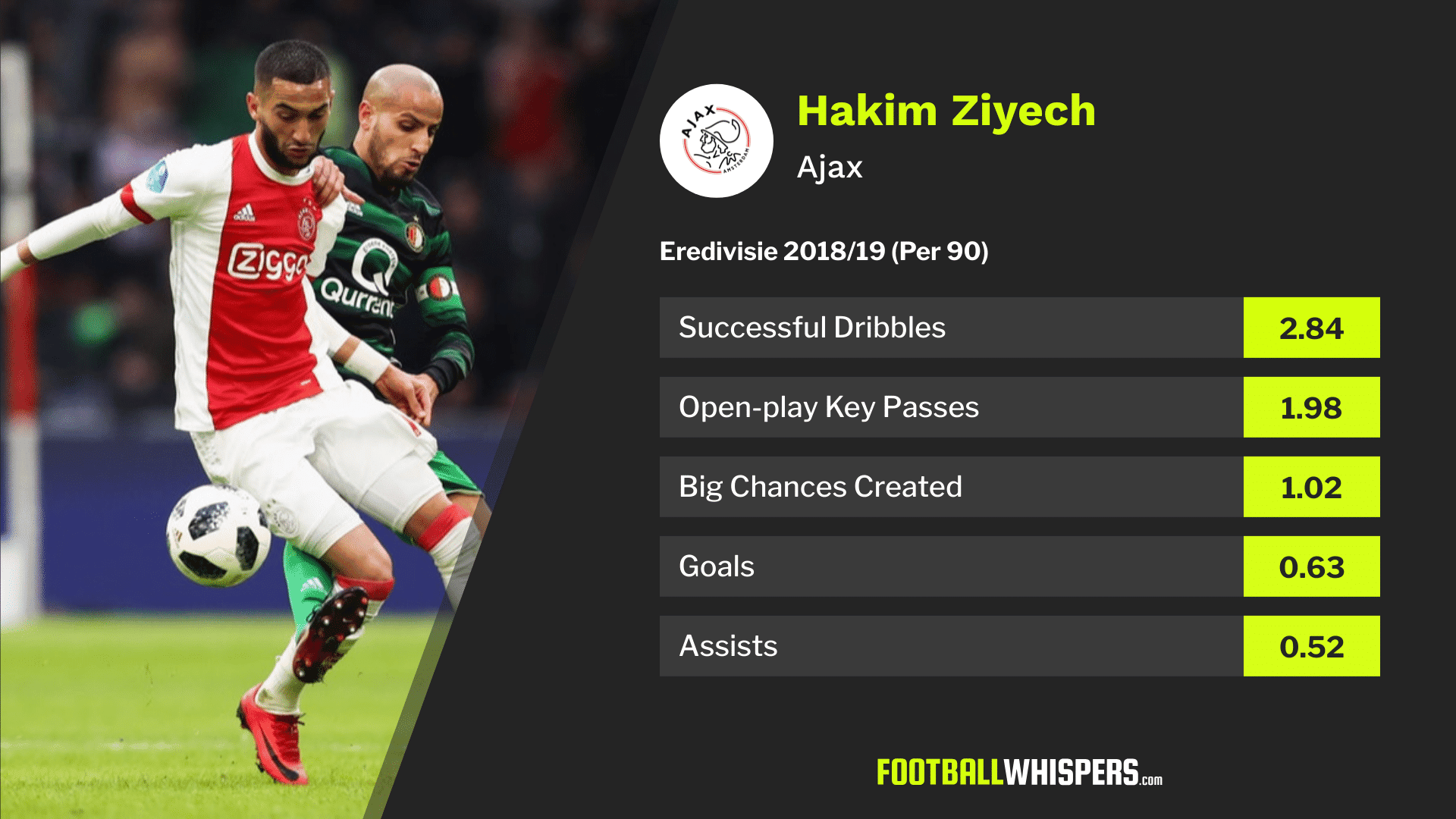 But despite posting impressive numbers for the Eredivisie champions, his style of play may ultimately limit his options.

He thrives in the Ajax set-up partly because Erik ten Hag’s team is set up to allow it. Despite starting in the attacking three, he isn’t tasked with getting beyond the front man. He isn’t judged on whether or not he can make the most of the space created by Dušan Tadić in his false-nine role.

In many ways, he’s playing the same role as Philippe Coutinho did when he was at Liverpool. Something of a luxury, he’s able to play his game because of the work others do. That isn't to suggest he doesn't put in a shift, he does. It's just he's different to the norm now. He drops deep and influences play with raking passes and incisive through balls. Many of his goals come from him arriving late into the area.

While he’s one of the best at doing just that, very few teams play with such wide players these days. Attackers are, for the most part, there to score goals. Not just any goal. A certain type of goal.

They need to be able to lead the line. They need to be comfortable playing as a centre-forward at times. Look at Sadio Mané, Mohamed Salah, Heung-min Son, Anthony Martial. They can all do it. They don’t just do a job there, they excel in that role. It’s what's expected from these types of attackers.

It means Ziyech will have to think carefully about his next move so not to end up as a square peg for a team looking to fill a round hole. His game would be blunted and he'd not be as effective.

Similarly, teams will have to look beyond the numbers he's posting to ensure his strengths are exposed as opposed to his weaknesses.

For the price being quoted, he isn't a gamble. But after everything is broken down, he becomes a bit of a risk. He's 26 and hasn't played outside of Holland so he'd have to be afforded a season to adapt. He's pulled the strings in a particular style but there's no guarantee he'd be as good in other systems.

For someone seemingly so versatile, he's a lot more rigid than many perhaps realise. And it's why perhaps he's still in the Netherlands despite impressing for so long.

It's a big summer for Ziyech. Make the right move and he could take his game up another level. Get it wrong and he could be back in Holland after a season having failed to impress.