There was a time, not so long ago, that Andrija Živković looked set to be filed under ‘Football Manager wonderkids who failed to live up to their hype'. He signed for Benfica on a free transfer from FK Partizan in the summer of 2016 having rejected a host of Europe's elite clubs.

The Estádio da Luz was seen as the place to help nurture and develop him before he moved to an even bigger club further down the line. However, his first campaign in Portugal was disappointing and interest in him dwindled.

He played a combined 944 minutes across the league and Champions League and failed to score for his new side. He did, however, manage to set up three goals for his new team-mates. It wasn't bad but it wasn't the sort of form people had come to expect to see from the Serbia international.

But it's been all change for Benfica this season, to the benefit of Živković. He's played more than 1,000 minutes of football and is thriving in his new role. He is, once again, catching the eye of Europe's best and recent reports in Portugal suggest he is an Arsenal and Manchester United transfer target.

The Serbian was previously subject of Tottenham Hotspur, Manchester City, Chelsea and Liverpool transfer rumours before his move to Portugal, making that six English clubs with a vested interest in the playmaker.

Serbia, as a nation, expects a lot from the versatile attacker. He's the youngest player to be capped by the country, aged just 17, and also the youngest captain in Partizan Belgrade's history – taking the armband the same year he was first capped by Serbia.

Živković played a key part in the under-20 team winning the 2015 World Cup. He finished the tournament with two goals and two assists to his name. It was anticipated he'd be the poster boy for that group of players taking the senior squad by storm. Three years later he has just seven full caps to his name.

While many had hoped he'd stay in an attempt to make Partizan a force in Europe once more, Živković always had one eye on the door. His first contract with the club, which he signed in the summer of 2013, was a long drawn out process. The move to make him captain was a calculated gamble made almost to guilt him into staying in Serbia.

It worked, to an extent. But, as interest in him intensified, it became clear he wouldn't see out his teenage years in his homeland. In February 2016, Partizan suspended Živković from first-team duties for refusing to extend his contract with the club.

A little over five months later, and just six days before his 20th birthday, the attacker put pen to paper on a deal with Benfica. According to reports, he rejected offers from Liverpool, who had brought compatriot Marko Grujić to the club in the same window, Spurs and Manchester City to join the Portuguese champions.

Živković burst onto the scene as a winger. He was often deployed on the right-hand flank when at Partizan, a move which allowed him to cut inside onto his stronger left foot. He's explosively quick, with and without the ball, and breaks the defensive lines with his direct style but, unlike many other wingers, he's a creator and can pick a pass.

Benfica manager Rui Vitória has looked to utilise Živković's skill set in the middle third this season. Similar to Pep Guardiola's use of Kevin De Bruyne as a box-to-box midfielder, Vitória has played the Serbian international as part of his midfield three, operating more on the left, allowing him to dictate proceedings and pull the strings.

In this role, fans have seen a completely different player to the one that previously terrorised full-backs. He's showing a maturity to his game that many didn't expect to see from the 21-year-old. He's refined his play to get the most out of operating in a withdrawn role. And now, he's a creative force. 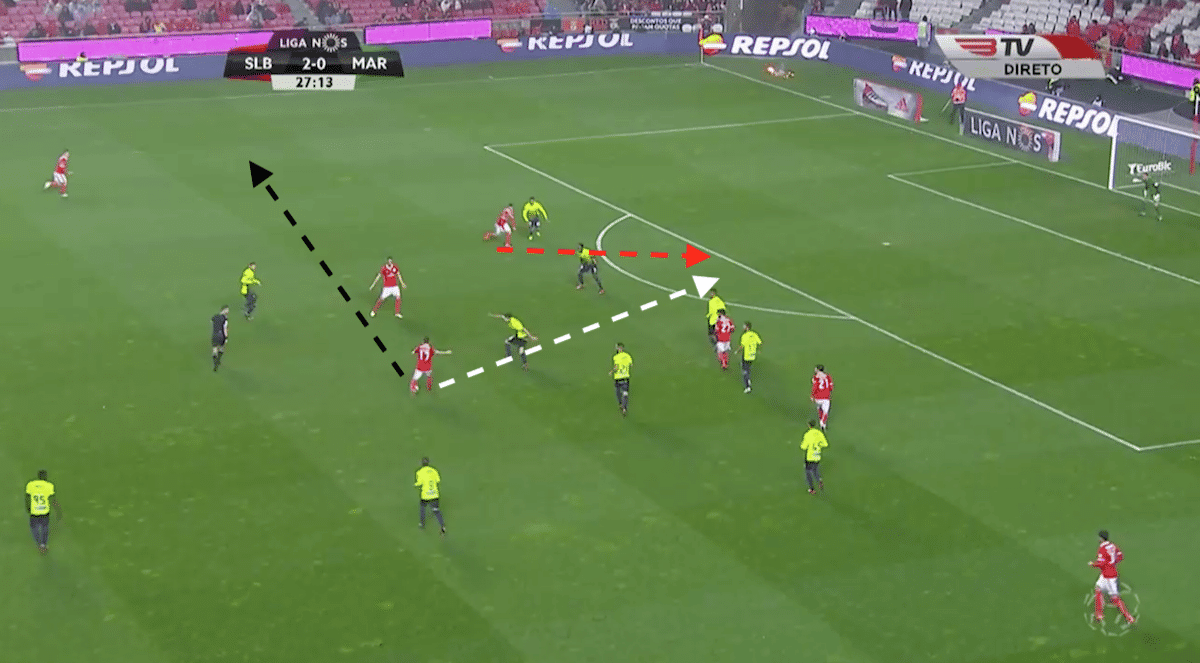 In the above picture you see Živković in possession of the ball. He's drifted in from the right-hand side but, with six opposition players blocking his route to goal, it doesn't look like a dangerous scenario. There's a pass out wide to Tottenham Hotspur transfer target Álex Grimaldo, shown by the black arrow, and it's one many others would opt to take.

However, Živković spots a run, highlighted by the red arrow, and threads a pass through the heart of the defence to put his team-mate in on goal. He shows great vision and he perfectly executes the pass. 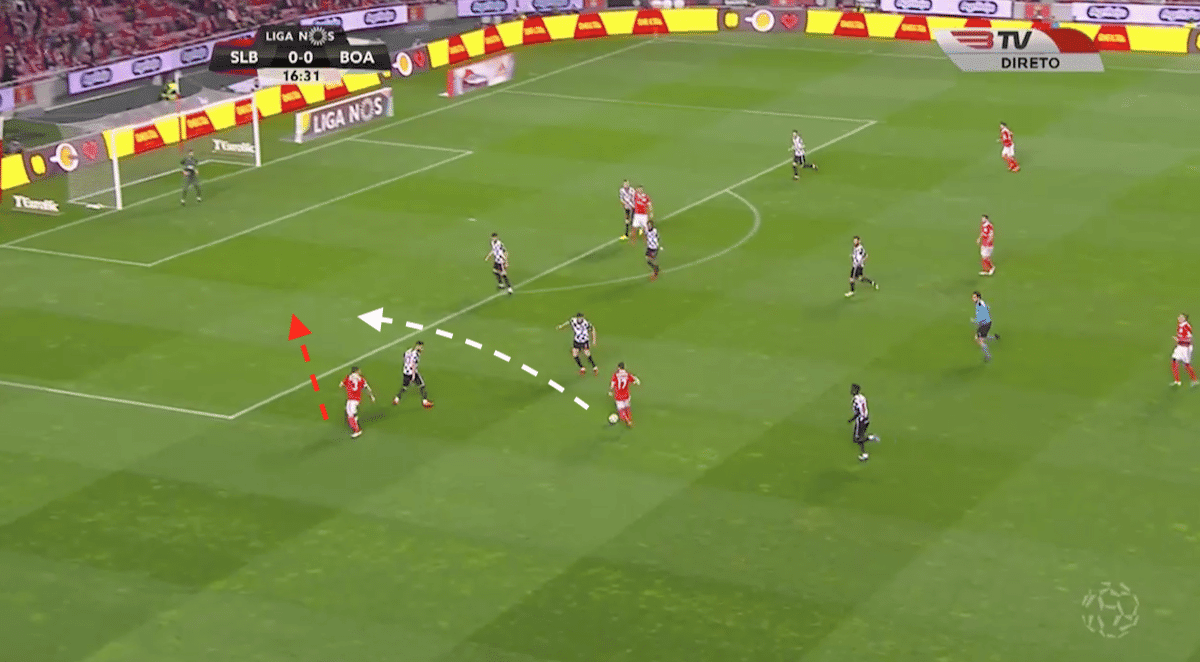 The 21-year-old has a unique trait. He slows play down and lulls the opposition into a false sense of security before a quick flick of the boot speeds the game up. It's this ability which helps him carve out chances with regularity.

You see it in the picture above. He takes a touch, weighs up his options before playing a delicate outside of the foot pass into the path of Grimaldo. The Boavista defenders are standing still having been slowed down by Živković and aren't quick enough to react to the pass. 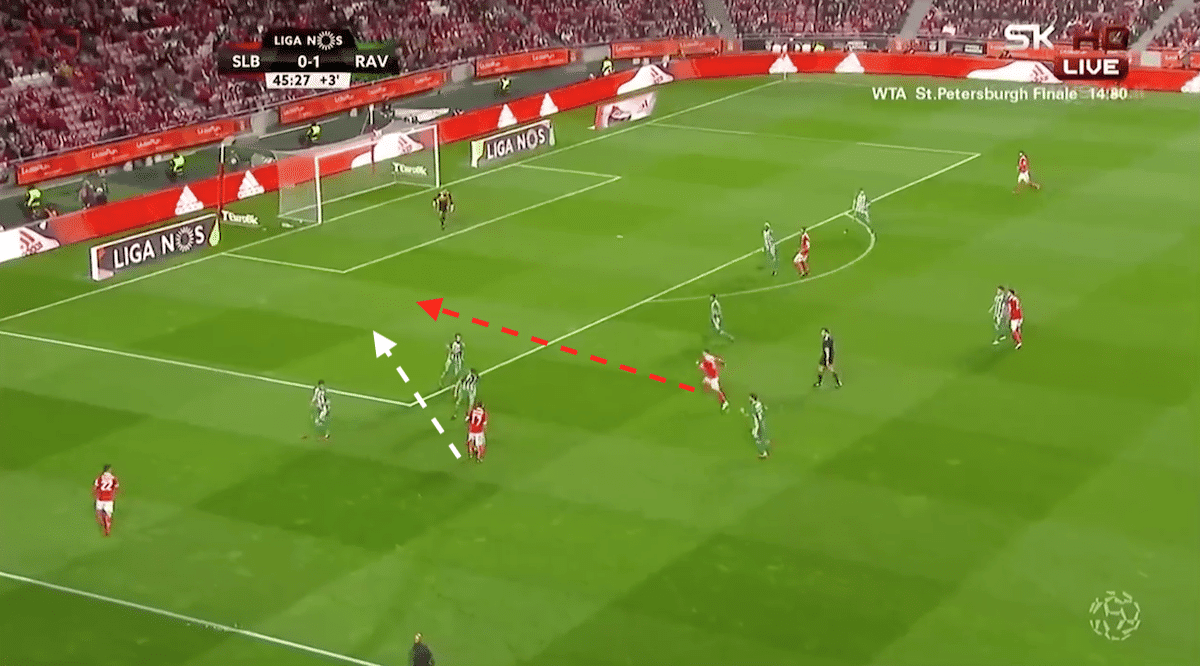 The picture above is similar to what Živković did against Boavista. He picks the ball up and drives at the defence, but then slows the game down and almost stands still. The opposition appear to have the situation under control but with a deft flick of his boot he's played a pass into the space behind for the player breaking from midfield to get on the end of.

While the latter two passes look simple, they're far from easy to execute on a regular basis. You often see these passes overhit and the potential opportunity is wasted.

However, Živković continues to break the defensive lines and pull the strings. He's playing 1.62 open play key passes per 90 minutes and maintained his 1.77 completed dribbles stat despite now being used in a more flooded area of the pitch. Wingers usually have more chances to isolate the opposition but this positional change hasn't had a negative impact on Živković's game.

The transition from Portuguese football to the Premier League isn't always straightforward, just ask Lazar Marković, but it can be done. Ederson, David Luiz, Ramires have all enjoyed varying degrees of success in the English top flight.

Reports suggest Živković has a £52.5million release clause. It may seem steep but given the current market and the potential Živković has, it could turn out to be a bargain down the line.