The port city of Marseille is perhaps one of the most picturesque places in southern Europe. From the sunlight glistening off the boats of varying shapes and sizes, the hustle and bustle of cafe life down at Vieux Port, to the Basilica on top of the hill that is visible from almost every angle of this popular tourist destination.

Marseille is also the birthplace of one of France’s greatest sons, Zinédine Zidane. Born in La Castellane, a less hospitable, quarter difficle just north of the port, from the dusty streets and eye-sore tower blocks came a footballer gifted with the touch and guile rather seen in the beautiful game.

“Zidane has an internal vision,' said Aimé Jacquet in an interview in 2004. “His control is precise and discreet. He can make the ball do whatever he wants. But it is his drive which takes him forward. He is 100 per cent football.”

Under Jacquet’s guidance, Zidane would play a pivotal role in Les Bleus lifting the World Cup on home soil in 1998, but it wasn’t until a couple of years later, at the World Cup in Germany in 2006 that ‘Zizou’ would put in arguably his most majestic performance in the famous blue shirt.

Of his generation, he’s regarded as the greatest and Zinédine Zidane deserves his place as one of Football Whispers Top 10 Number 10s – you can view the full list here. However, his status as the hero of France ’98 is a little misplaced.

The images of the former Juventus midfielder towering above the Brazilian defence to twice head past Claudio Taffarel at the Stade de France will never be forgotten, yet that was his first real positive influence on the tournament. A tactic on the day that was masterminded by Jacquet and his team.

A red card in the second group game against Saudi Arabia saw him miss two games, returning for the penalty shoot-out win over Italy in Paris. In a tight and tense game, Zidane took the first spot kick as they won 4-3.

Lilian Thuram was the semi-final hero, scoring twice to help France to a 2-1 come from behind win, setting the home nation up for Zidane’s final. 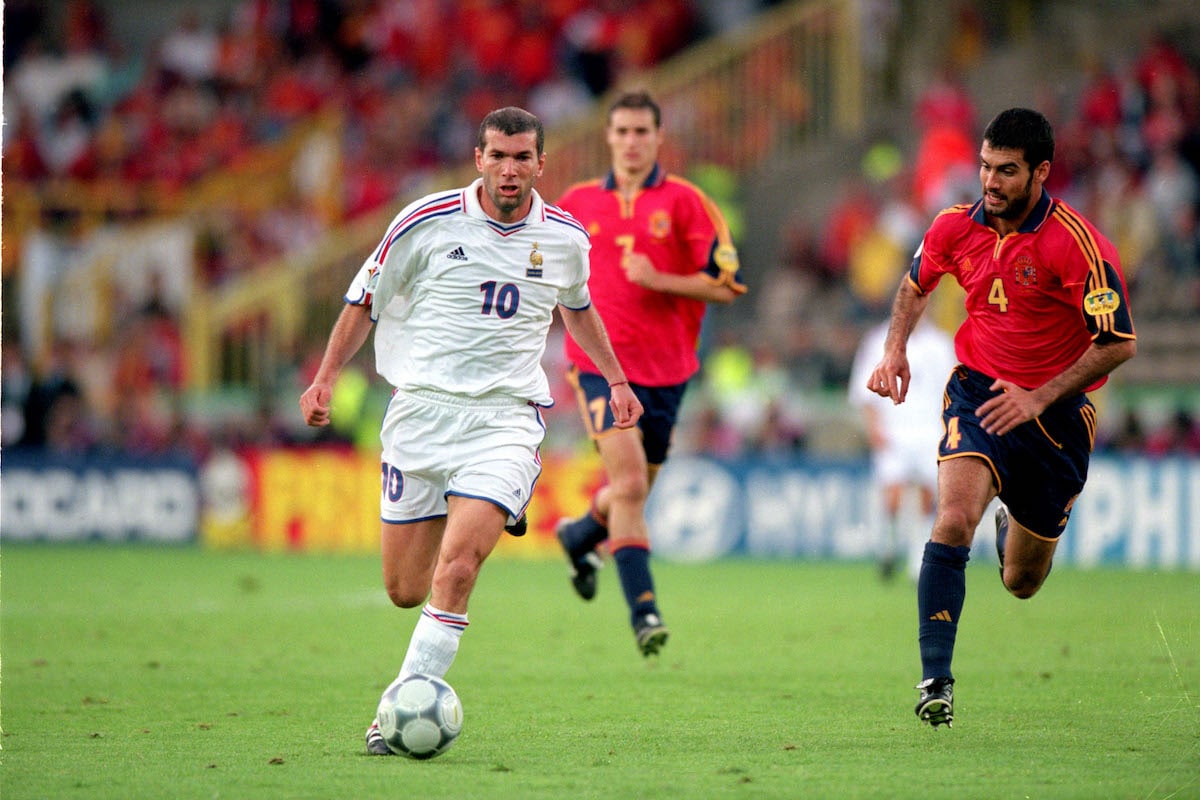 Arguably, it was at Euro 2000 that the playmaker hit his prime. Weaving his way around the midfield, pulling the strings to set up Thierry Henry in the 3-0 win over Denmark.

“As far as I'm concerned, this was when the competition truly started,” says Zidane, whose sublime free-kick broke the deadlock against Spain on 32 minutes. “The group games were hard but we'd never been tested like we were against Spain.” After Gaizka Mendieta had levelled from the spot, Youri Djorkaeff netted a brilliant winner. “From that moment we felt we could do something really great.”

“Before games I'd always leave the dressing room and spend a bit of time on my own with the ball,” Zidane later said. “That's when it started coming back to me and I thought, ‘Wow, 16 years ago I was at the Vélodrome watching France beat Portugal. Now I've got the chance to do what they did.'”

France won 1-0, with Zizou scoring from the spot after Abel Xavier had handled. Zidane was almost untouchable, effortlessly jinking in and out of tackles, forcing his team forward time and time again.

After going 1-0 down to Italy in Brussels, Les Bleus didn’t give up hope of coming out on top during the final. “We told ourselves if we equalised we'd win. In extra-time there'd be only one team on the pitch. That was the case.” David Trezeguet duly provided the finishing touch to score the Golden Goal.

That was Zidane’s time and he was rewarded with the Player of the Tournament award. Although he never looked the fastest, he would almost glide beyond opponents; spinning, changing direction, bamboozling anyone who tried to halt his progress.

“I've met people who compared me a bit to [Alfredo] Di Stefano, saying I had almost the same style technically with the ball. But everyone lives in his time, with the rhythm of his time. And today it [the game] goes even faster. But I think I would manage.”

The Real Madrid legend would have been proud to score a goal like Zidane’s amazing volley that won Los Blancos the 2002 UEFA Champions League final against Bayer Leverkusen.

Watching the ball drop out of the Glasgow sky, he swept his magical left foot and the ball flew into the top corner. An amazing goal and a beautiful moment worthy of winning any final.

“I feel that volley was a beautiful and unique goal,” Zizou told FourFourTwo when asked about the goal. “I don’t plan those goals – you just have to be ready when the opportunity appears. I hit it — precisely, quickly and just right. I remember thinking how lucky I was to catch the ball at the right angle and height.

“I’m glad the goal gave us the ­trophy – it was certainly one of the most important moments of my career.”

For all his majesty and elegance off the pitch, as the red card in ’98 showed, he seemed to fight with an inner rage that perhaps drove him on to success in all areas of his career.

A five-game suspension after head-butting Hamburg’s Jochen Kientz for Juventus in 2000 gave us a glimpse of what was to come six years later.

Hidden Anger of a Genius 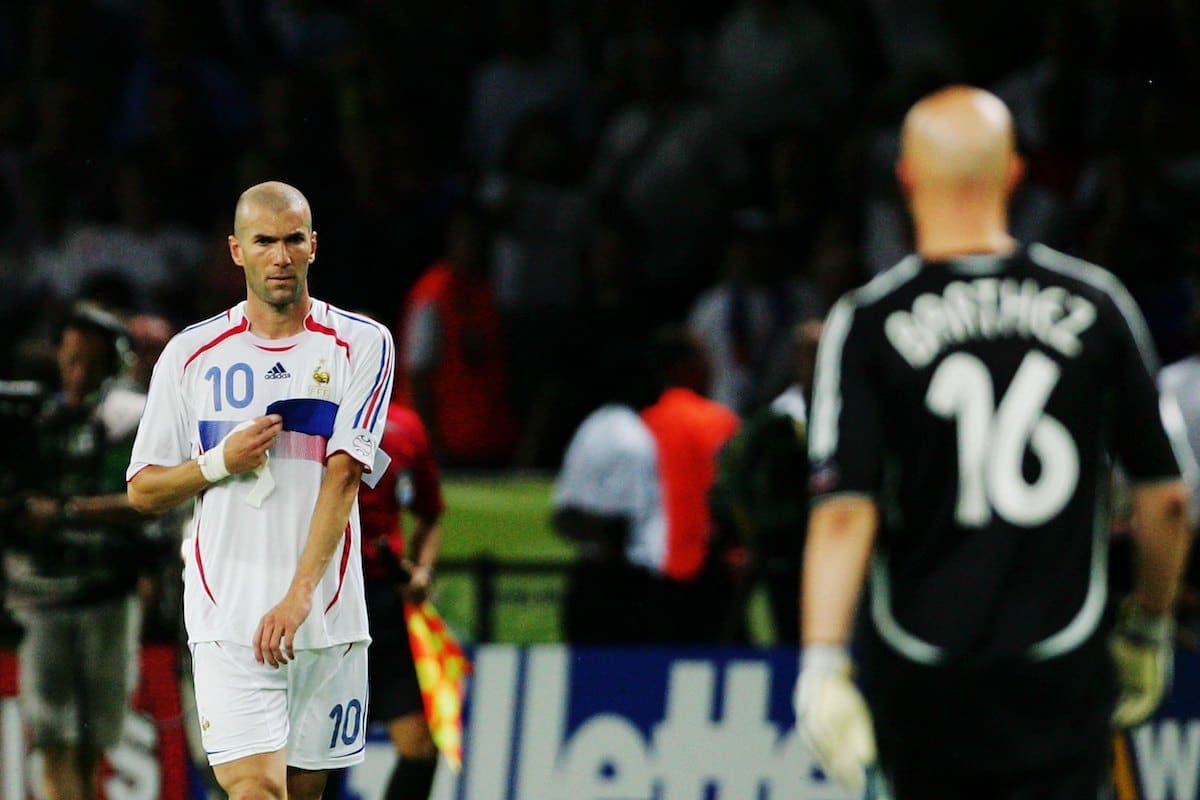 It’s a trait that was picked up early in his career, but at AS Cannes they were able to channel it in a positive manner, focusing on football. He earned a move to Bordeaux and was guided by fellow Marseillais coach Roland Courbis, and by the time he arrived in Turin in 1996, he had gained a reputation of self-control and discipline, both on and off the pitch.

“You could see he was an extraordinary player straight away,” said Courbis, ‘but it was a moment in his career when you couldn't afford to do just anything with him. For example, you couldn't just give him his head and burn him out in a season.”

He may have had a spark on the field, something that was hardened by his time in Serie A, but off the pitch, he was a family man. Preferring to spend time with his family and friends, rather than enjoy the Italian night-life.

The 2006 World Cup will always be remembered for Zidane’s actions, both good and bad. With the ball at his feet, his performances against Spain and Brazil were two of the most stunning, mesmerising displays by a number 10 in international football.

Dancing around the field, spraying passes, turning back the clock 10 years. But then, during the final — a match that would signal the last time he would step on the pitch for a competitive match — it would end in sadness.

Echoing memories of 2000, after scoring from the penalty spot, Zidane would turn and head-butt Marco Materazzi in the chest, receiving a straight red card and bringing an end to an amazing career in the most anti-climactic way.

Zidane is now forging a path as a coach and has done an amazing job on the bench at Real Madrid, but he will have to go a long way to make himself as memorable a manager as he was as a dazzling Number 10.