Guinea is four points at the top of Group B in the ongoing AFCON 2022 tournament. They need to win this match to have a chance of progressing to the next round but can they do it against Zimbabwe? Read on for more details about this game, including the best free predictions for our readers.

Our Best Predictions and Odds for Zimbabwe vs Guinea

This will be the sixth meeting between Zimbabwe and Guinea. Guinea won three and bagged three draws in those meetings. It means Zimbabwe look to win their first competitive fixture against Guinea in a match that could see them secure a third place playoff spot or get bundled out of the 2022 AFCON tournament altogether.

After failing to secure a win in this year’s AFCON tournament, Zimbabwe will not go down in the last group game without a fight. Guinea’s strong defence that hasn’t leaked a goal in the last three games will also be a factor in this match. Moreover, out of six previous encounters, two games ended in a barren draw, three with a scoreline of 1-0 and a 1-1 outcome. These stats signal a tough duel that always existed between these teams. Our first pick for Zimbabwe vs Guinea is a draw at the break.

Guinea is at the top of Group B table with four points and only a goal scored. They must win this game or get a least a draw to have a chance in the next round. Given the impressive record they have against Zimbabwe, we are giving Guinea a narrow edge in this fixture.

The Best Odds, H2H and Team Stats for Zimbabwe vs Guinea

We have sampled the best Zimbabwe vs Guinea odds as well as the latest stats for the two teams to further help you place your bet on this AFCON 2022 fixture.

Zimbabwe is yet to win a game in the 2022 AFCON tournament. They lost 1-0 in the first game of the competition and a 2-1 loss to Malawi in the second game. This will be Zimbabwe’s toughest game yet in this year’s AFCON tournament. They have played against Guinea six times previously but never won any of those games

The best Zimbabwe ever got against Guinea was three draws and they scored only one goal in all those meetings. On the other hand, Guinea’s quest for a playoff spot in the AFCON 2022 comes against a team that is hell bent on getting their revenge.  Zimbabwe can only bank on winning this game to participate in third place playoffs. However, with three goals leaked in two games (the worst in Group B), making a comeback to participate in AFCON 2022 playoffs remains a far cry. Here is how these teams will possibly lineup for this fixture: 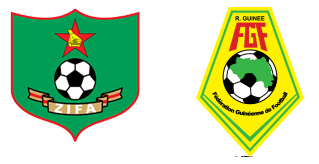 How did these teams perform in the last five games?

How are the two teams ranked by FIFA?

Zimbabwe is position 121 while Guinea is ranked 81st by FIFA