Real Madrid had a decision to make in the summer. There was no way that they could keep both Karim Benzema and Álvaro Morata happy.

The Spaniard had sat on the bench for most of the season, second fiddle to the Frenchman.

But there was no doubt that Zinédine Zidane’s loyalty was with Benzema.

Yet, watching the Frenchman against Valencia yesterday won’t have helped his case.

Gary Lineker: Fans have no idea how good top… by FootballWhispers

For all the talk of Real Madrid walking the league after the rather chaotic summer at Barcelona, it’s actually Los Blancos who are playing catch up, already two points behind their rivals from Catalonia, who’ve won their opening two.

Of course, Valencia under Marcelino are already a different prospect from the disaster of recent years, but it’s not ideal for the first home game of the season for Madrid.

And as well as Los Che played, the home side really should have won the game.

And if Benzema was able to finish one of his eight shots on goal they would have.

By the end of the game it was becoming ridiculous. It felt like Valencia could have left him unmarked in the six-yard box and he still would have missed. Although that pretty much did happen in the 88th minute (see below). 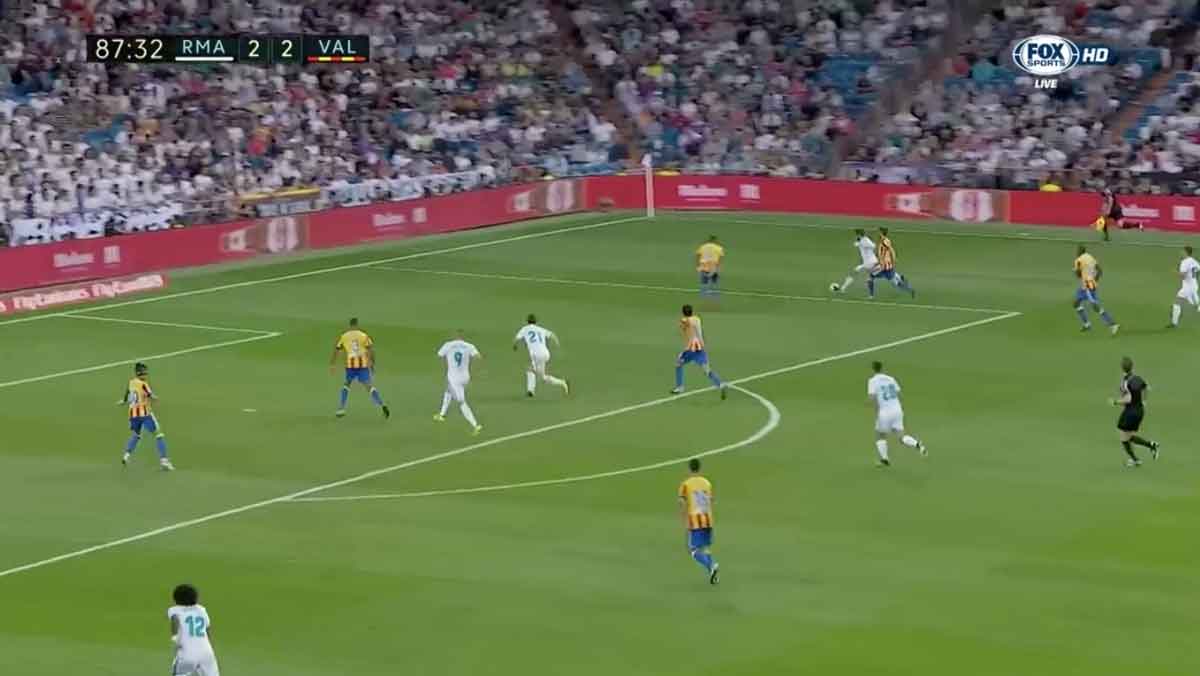 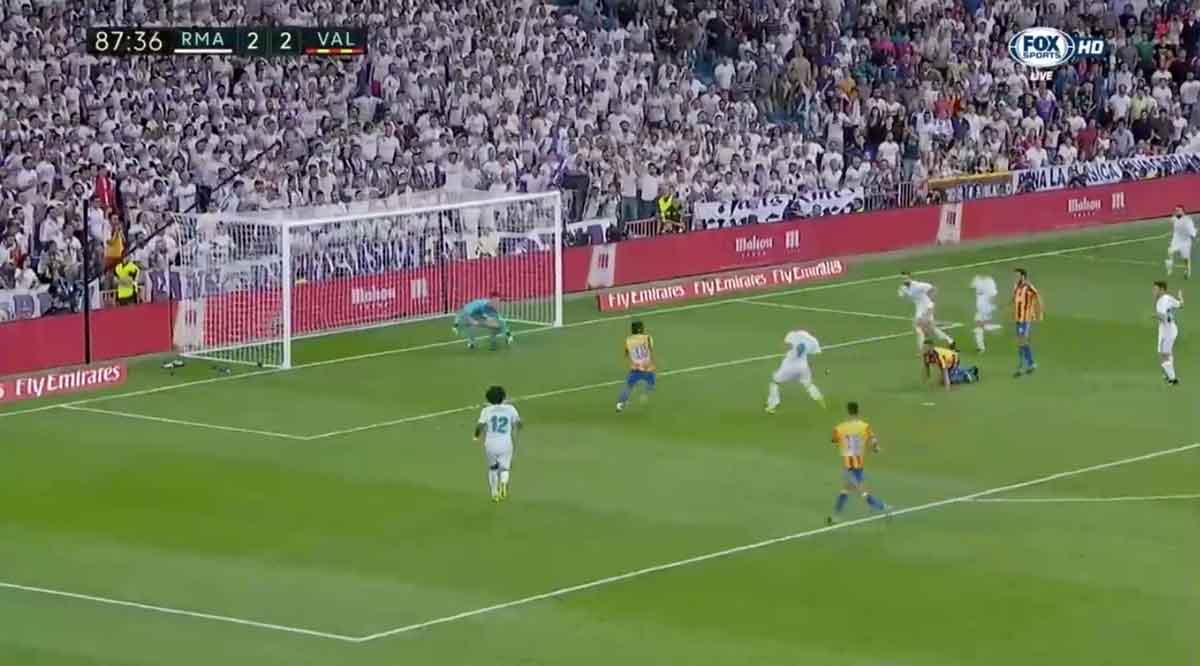 Yes, he made a good run and would have been free if Dani Carvajal found him from the cross. Instead, the ball went to Marco Asensio, who had already scored twice and was much more likely than Benzema to find the back of the net, but when his shot was blocked, it fell to the Frenchman.

He had to score. There is no way he couldn’t at least hit the target. But he hit his shot wide. It wasn’t good enough for the main man at arguably the biggest club in the world right now.

Maybe you could forgive him if that was his first chance. Or if he was a youngster coming off the bench – perhaps Borja Mayoral wouldn’t have been blamed so much, although it’s doubtful. But it was the icing on the cake in a truly woeful goalscoring performance from the Frenchman. 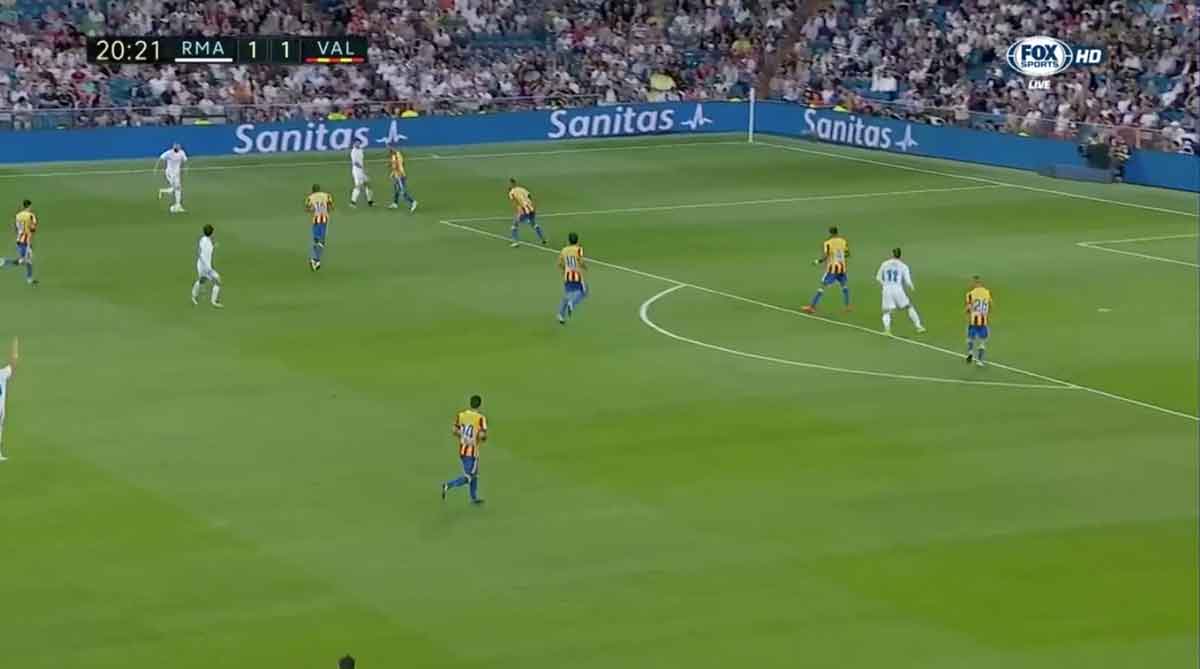 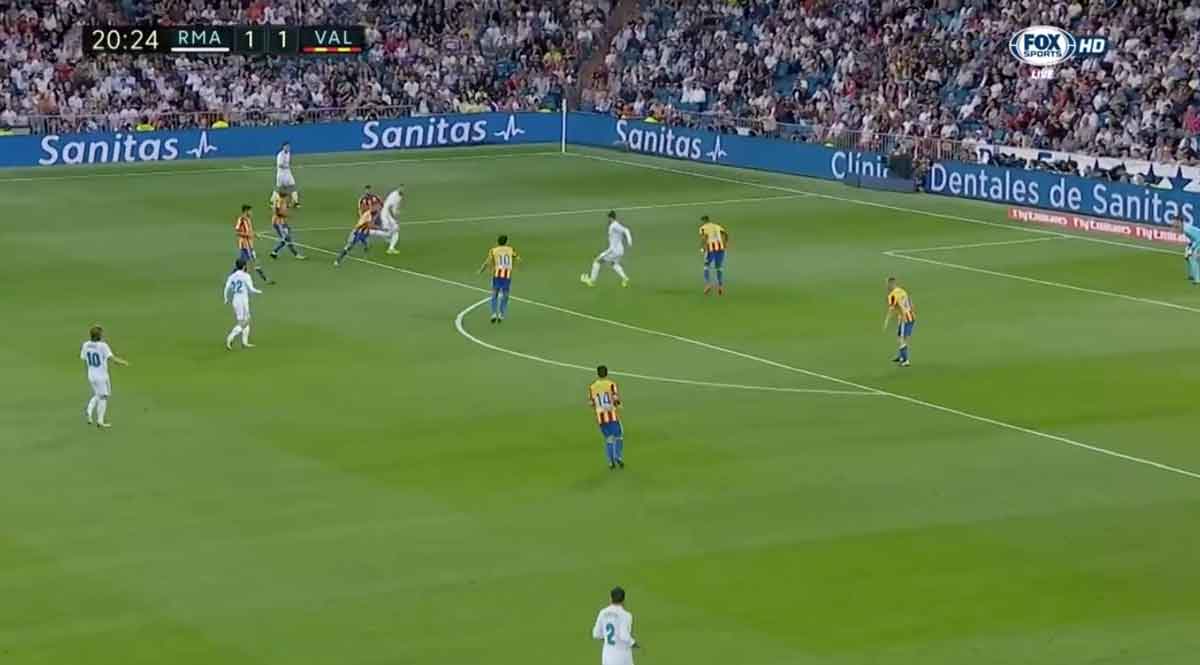 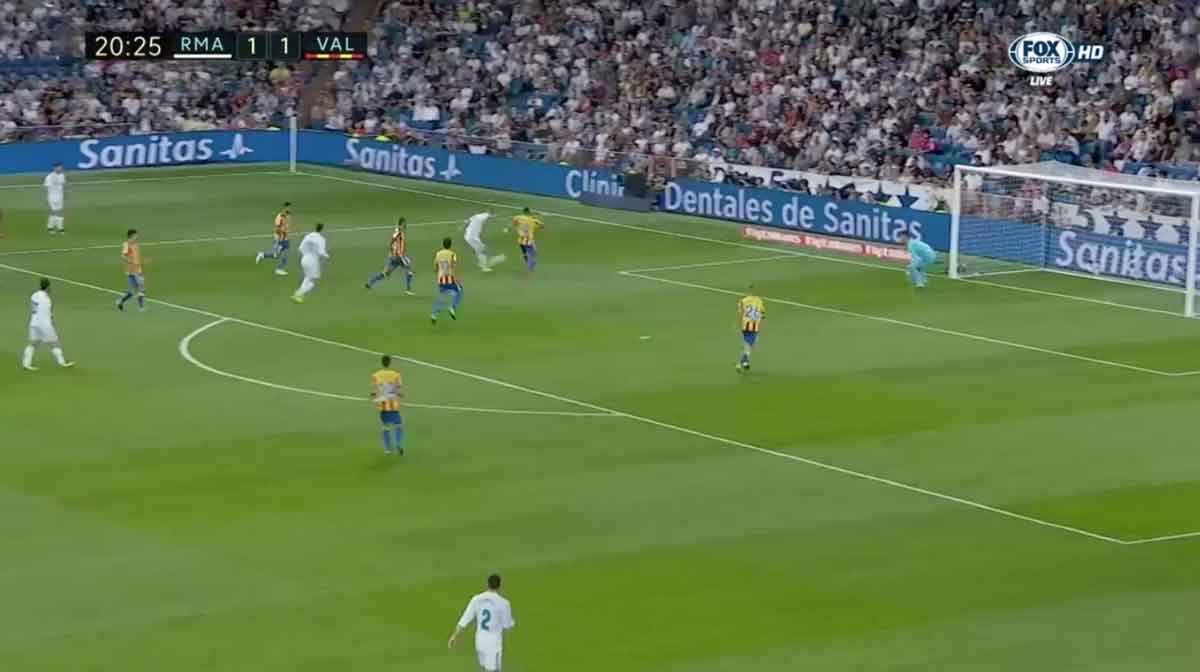 His first attempt on goal (seen in the stills above) actually wasn’t the worst in the world.

Benzema did well to create the chance from nothing, playing a nice one-two with Gareth Bale before firing into the side netting from a tight angle. You wouldn’t really have expected him to score from there. 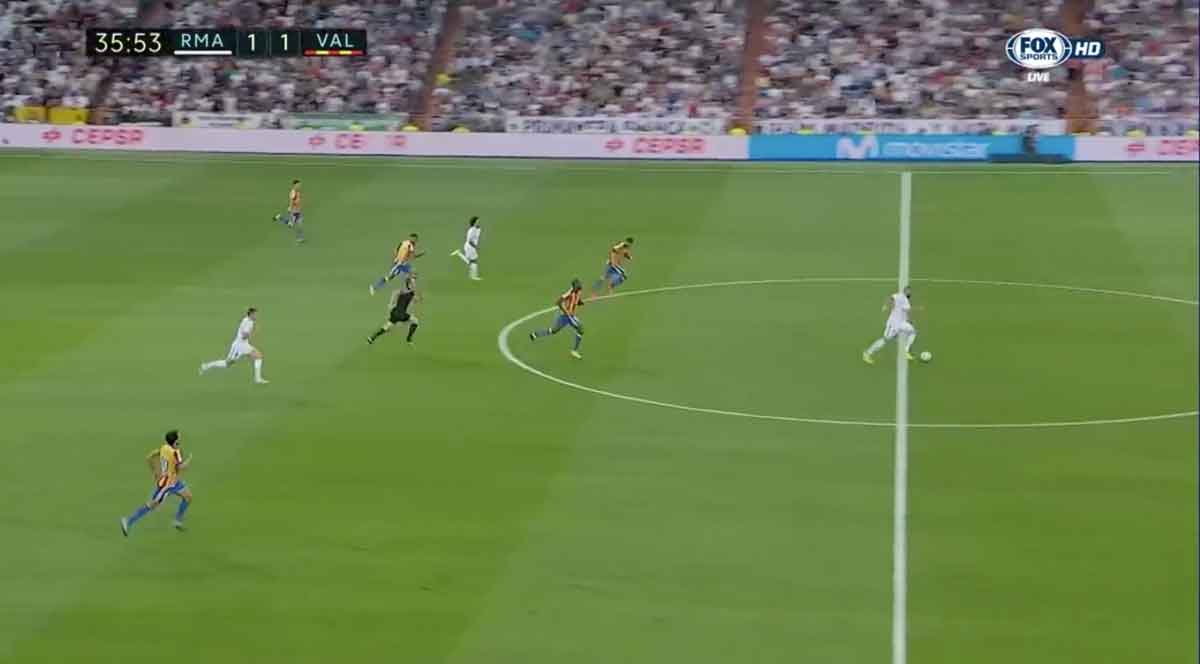 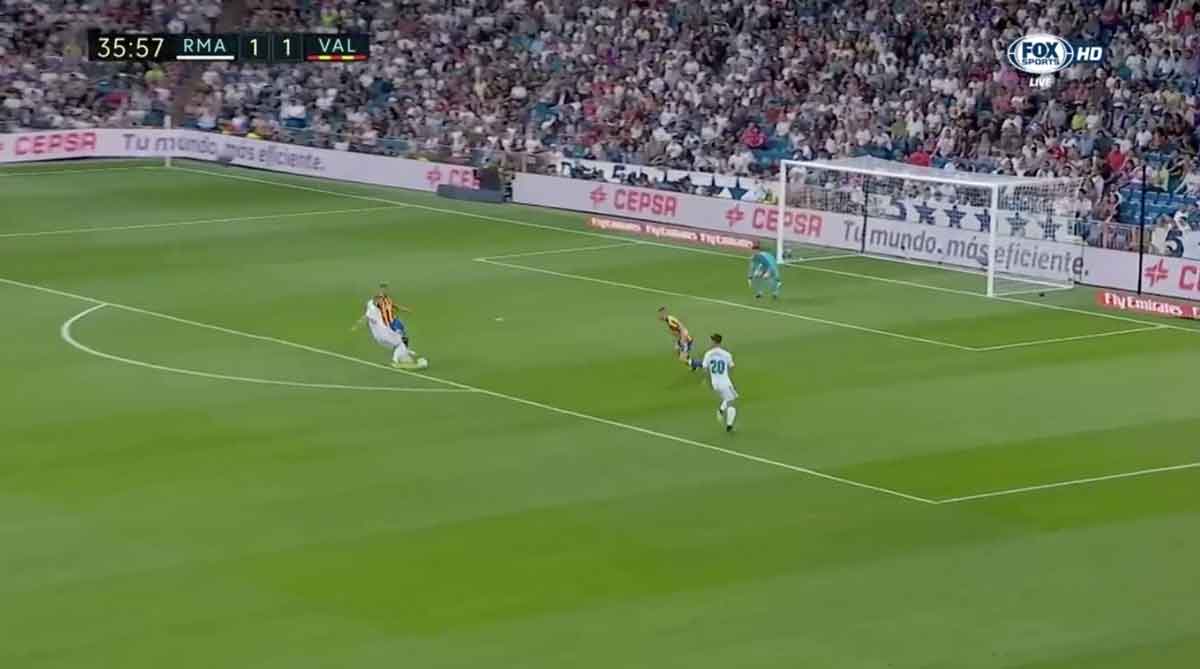 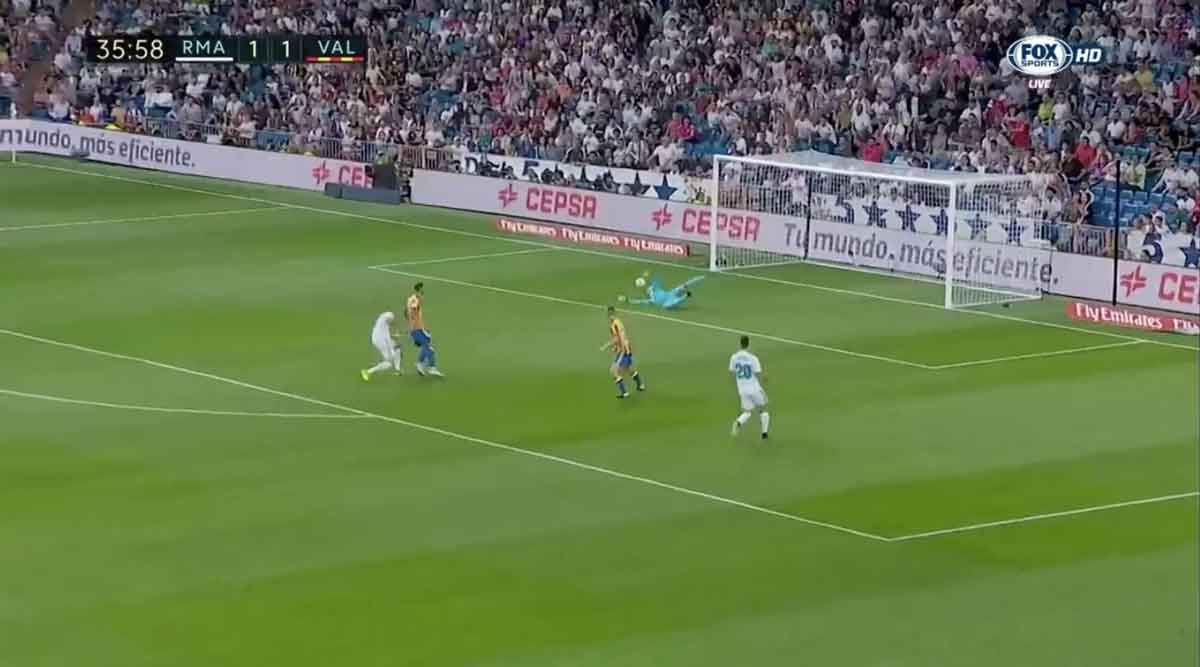 He then broke through from his own half, drawing a good save from Neto, as you can see above.

Perhaps he should have played in Asensio, but you’d expect a striker to be selfish.

It all went a bit wrong after that though. 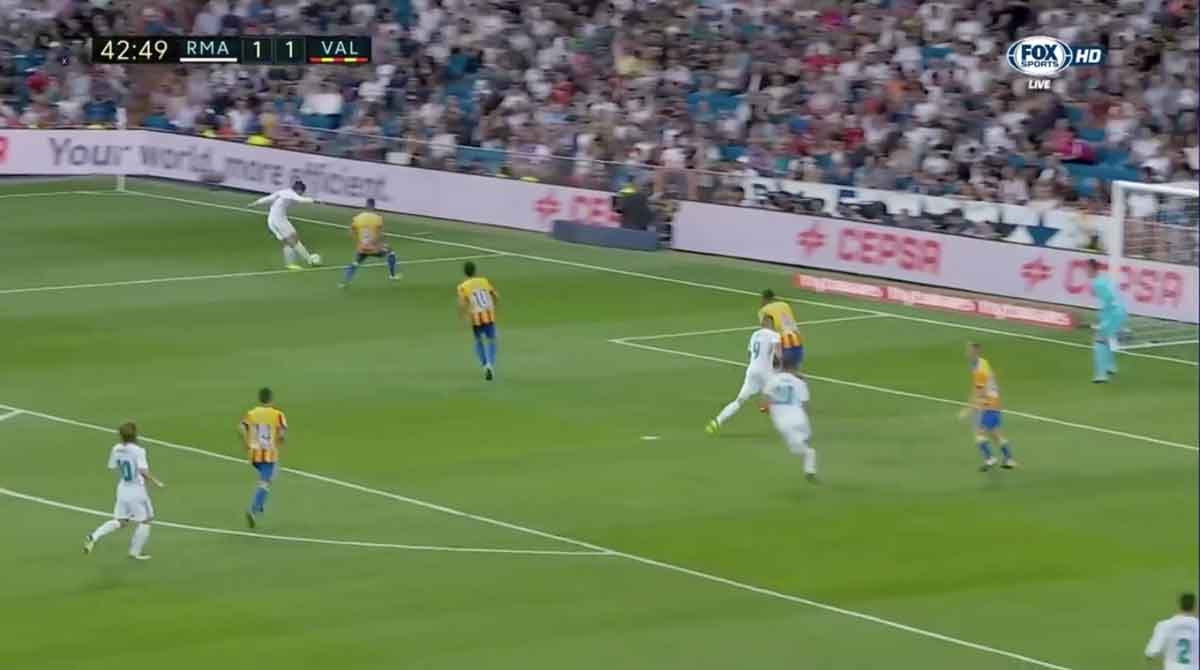 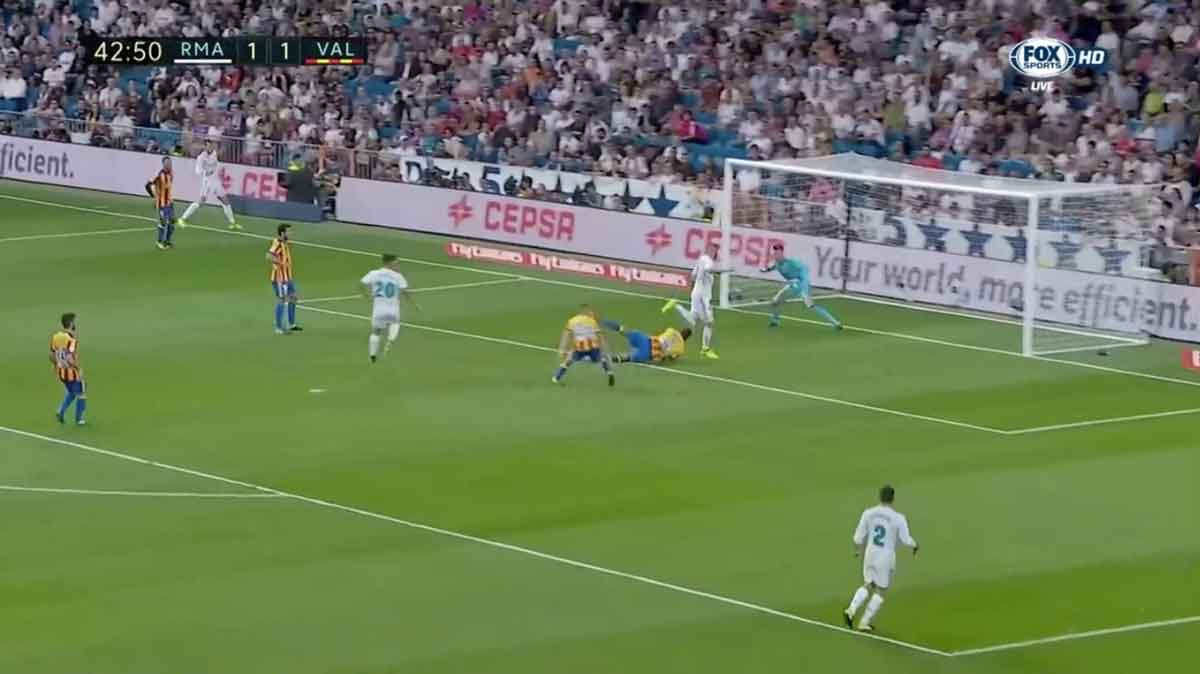 He did well to get on the end of a ball from Bale, but somehow put the above chance over the bar.

After watching it at least ten times, it’s still unclear how he doesn’t put it on target, or how he manages to get the ball over the bar when his body shape should be sending it back low down into the corner.

It was an awful miss. 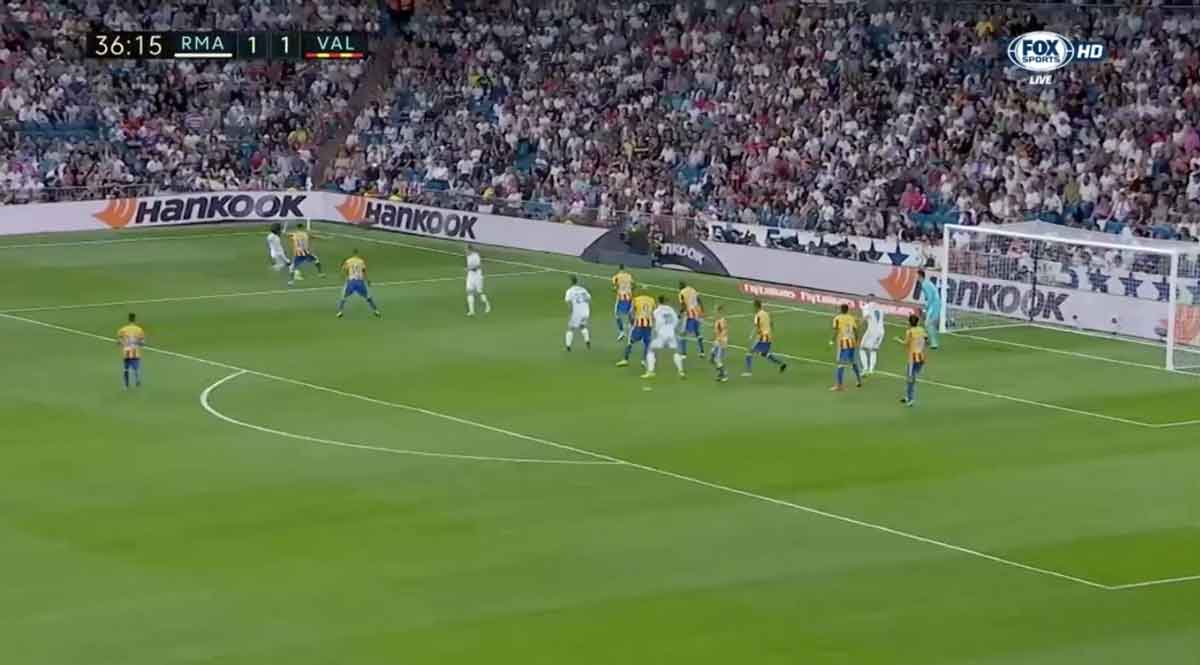 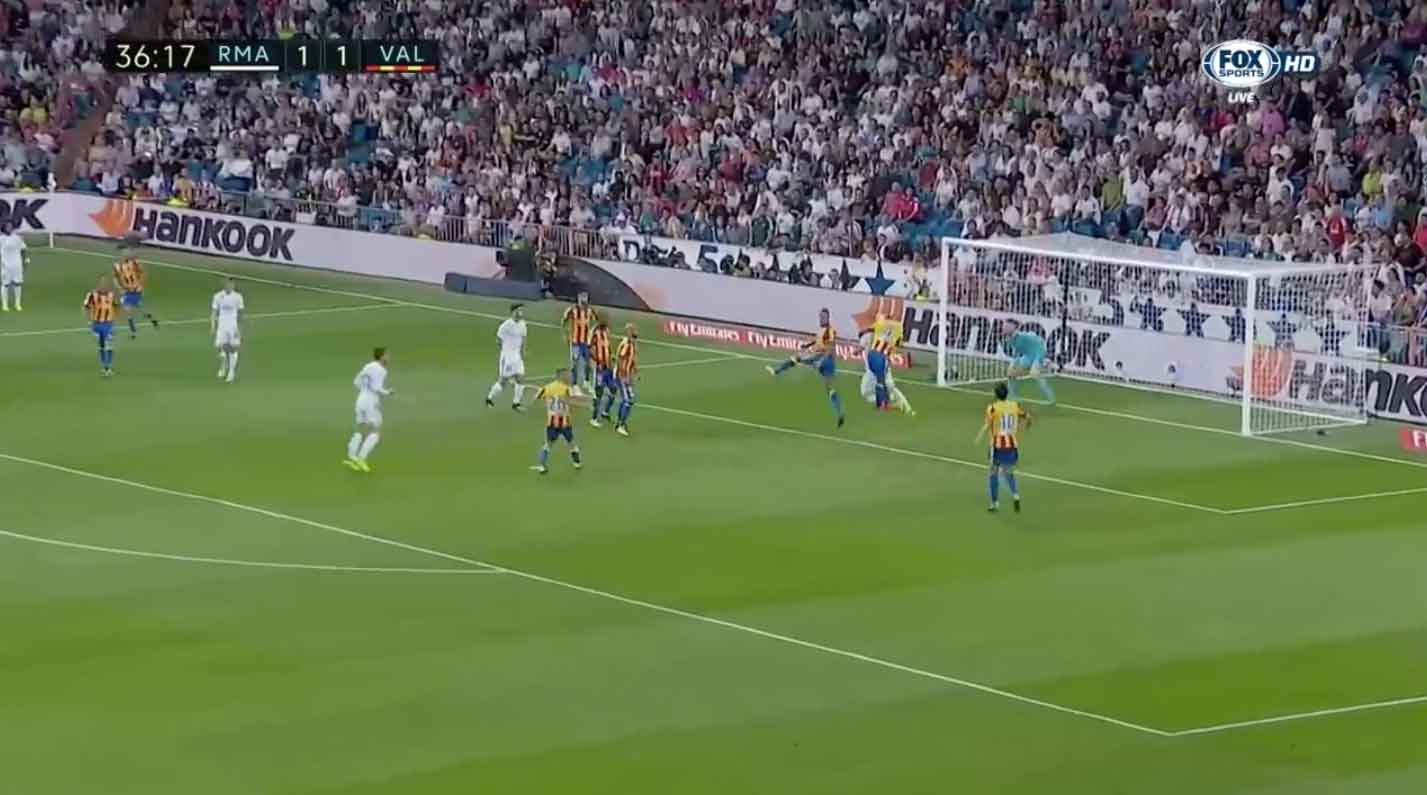 It had come just after a miss where he was saved by the offside flag.

There was no excuse for the Frenchman to be offside from Marcelo’s cross, but he was, which just about stopped the groaning when he put his header wide from less than six yards out.

Strikers are meant to be poachers and Benzema was anything but on Sunday evening.

His link-up play was also not near his usual levels, although that wasn’t helped by an off-the-pace Bale.

The two were jeered by the unhappy Bernabéu crowd after their performances, but Benzema took the brunt of the fans' criticism.

He’s still got his manager’s backing though.

“The fans here do what they wish,” Zidane said after the game.

“The important thing for us is that Karim gets chances. He did not score them today, but that's not important.

“This is football. Sometimes the ball does not go in. But we do not have to give an opinion on what the fans think.”

Madrid are light up front

Of course the manager will back his man, but with Real Madrid transfer target Kylian Mbappé on his way to Paris Saint-Germain you have to wonder if by letting Morata go, he’s made a big mistake.

Benzema’s 19 goals in all competitions during 2016/17 was his worst return at Madrid, bar his first season in the Spanish capital.

The only other out-and-out striker, Mayoral, is unproven in the Spanish top flight, and while Ronaldo and Bale can play there, the Welshman is also yet to impress this year.

With homegrown talent Morata scoring one and providing an assist earlier in the day for Chelsea, there will be some fans questioning Madrid’s transfer policy this summer – there are a few days left of the transfer window of course, but there is no sign of them bringing someone in up front.

There have been a number of forwards available this summer, such as , Andrea Belotti and Pierre-Emerick Aubameyang.

While they may not have all moved, you do wonder if in a few months’ time, this summer’s lack of activity up front may come back to bite them.