Despite the cynicism and pragmatishttp with which its domestic game and national team are increasingly imbued, Brazilian football remains associated with an ethereal beauty.

Such is their skill and audacity, throughout history players from the country have been considered artists, inspiring devotion far beyond their homeland.

And, despite the modern day’s more brutish air, past generations of Brazilian footballers are still regarded with a misty-eyed romanticism.

In football, the number ten is more than a shirt number. It appears on a player’s back but truthfully it often comes to define their style, role, even their entire career.

The number comes with responsibilities and expectations that few can shoulder gracefully – it's why we've chosen the greatest number 10s of all time.

That's why, in both wearing the number ten and being Brazilian, Zico must have felt an unbearable amount of pressure during his playing days.

And it speaks volumes that he came not only to justify the shirt but to embody his country’s sense of style during a remarkable career. 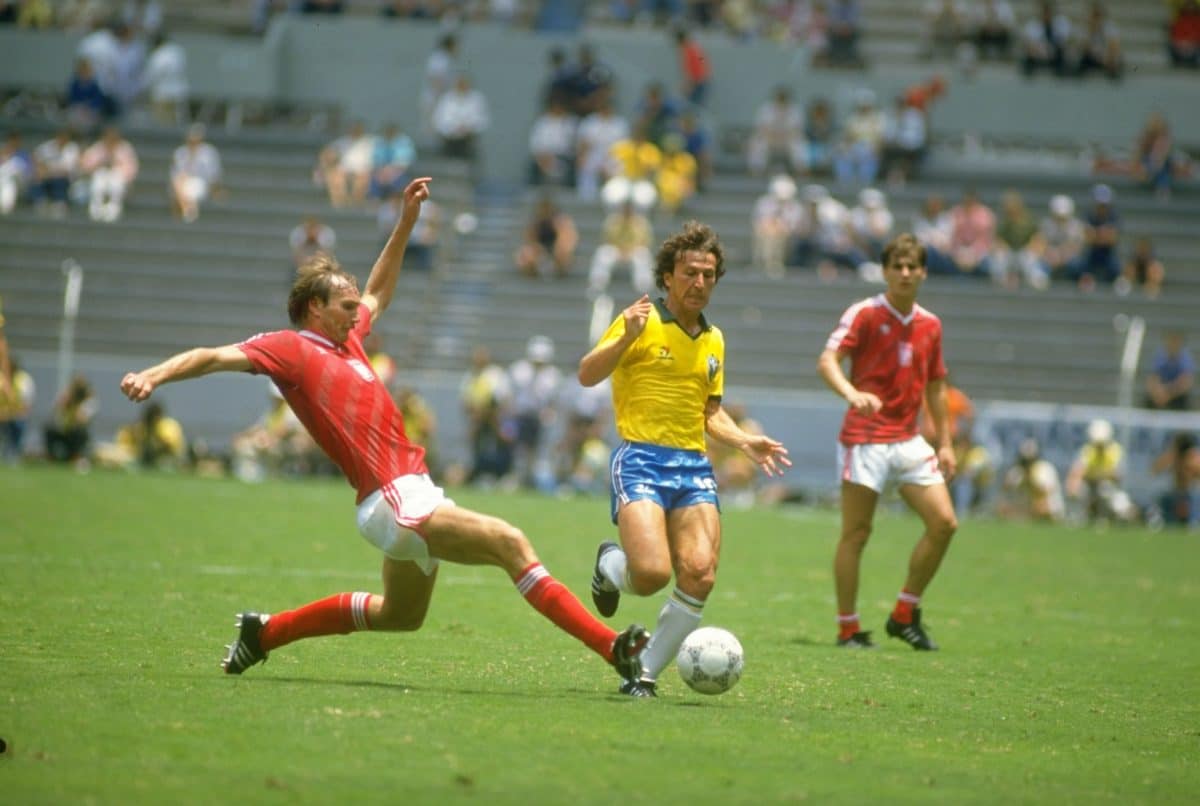 Lionel Messi struggled with the physical demands of football during his days as a youth player. In this respect, he was following on from Zico, who was almost turned away by Flamengo as a scrawny street urchin standing at just 4’9”.

Like so many others, Zico had spent many of his formative years playing futsal. Everything then was smaller; the pitch, the ball, the hype.

But football was the dream and, embarking on a rigorous training regime that included plenty of time in the gym and a change in diet, he became a part of Flamengo’s youth academy in 1960.

In a country where football is a form of religion, Zico appeared chosen to play. Both of his older brothers, Antunes and Edu, played professionally. Indeed, the latter played over 400 times for Rio de Janeiro club America and earned three caps for the Brazil national team.

And, despite his lack of physique, Zico found himself in the youth academy of not only one of the top clubs in Brazil, but the club his father supported.

Back then he was still known as ‘Arthurzico’, a moniker that played on his real name – Arthur Antunes Coimbra – and was given to him as a child by his family.

But, over the following two decades, he would come to be internationally renowned with the shortened, four-letter version of the nickname.

Zico’s early days in and around the Flamengo first team were times of flux. He was moved about from youth team to senior squad and back again, with two-time World Cup winning legend Mario Zagallo responsible for the player’s demotion in 1972.

However, two years later, under the auspices of his former youth coach Joubert, Zico asserted himself as one of the finest young talents of his generation, scoring 32 goals in 50 appearances.

In the process he became a regular in the Selecao, and was a key player for Brazil in their 1978 World Cup campaign.

However, Zico’s international career was to be one filled with platitudes, not trophies.

His World Cup beginnings were portentously unfortunate. He headed home in the dying embers of a 1978 group stage clash with Sweden, only for the referee to disallow the goal on account of his having blown the whistle to end the game while the ball was still in the air. Brazil drew 1-1 and went on to finish third in that year’s tournament.

Undeterred, Zico ratcheted up his scoring feats another level in the four years that followed his maiden World Cup outing. He hit 188 goals in all competitions in this period and another nickname was thrown his way, ‘The White Pele’.

This latest tag came with an iconic, almost godlike status; Zico was the first ‘new Pele’ since Pele himself.

At the age of 29 and at the peak of his powers, Zico was part of what many believe to be the greatest team never to win a major honour. He led Brazil into the 1982 World Cup alongside midfield team-mates of the highest calibre.

Captain Socrates pulled the strings while Falcao and Toninho Cerezo sat deep, and Zico was tasked with supporting the attack. That midfield is one of the most celebrated in football history – yet they would exit the competition early.

After breezing beyond the Soviet Union, Scotland and New Zealand in the opening round, Brazil soundly disposed of rivals Argentina with a 3-1 win started by a Zico tap-in that, while not showing his elegance or quick feet, perfectly illustrated his intelligence and reactions.

But that was the last win. Italy, inspired by Paolo Rossi’s clinical finishing, defeated the beautiful game’s most beautiful team. Brazil were out.

In two distinctly separate ways, Zico embodied the changing times. While previously Brazil’s finest players tended not to venture far from their homeland, he was part of a generation that left for European football.

And, one year on from the bitter 1982 World Cup exit, Zico left for the Italian game. He signed for Udinese in a move that saw Zebrette fans take to the streets to demand the deal went through.

Zico was also the perfect man to bridge the gap between the old and new of Brazilian football. If the 1982 Selecao was the peak of football as art, what followed was a gradual, brutal overhaul of the country’s style.

And while he was as artful a number ten as there is ever likely to be, Zico was also a practical man who didn’t feel the heartbreak of 1982 like others did. Instead he saw the defeat as a result of overly idealistic tactics. 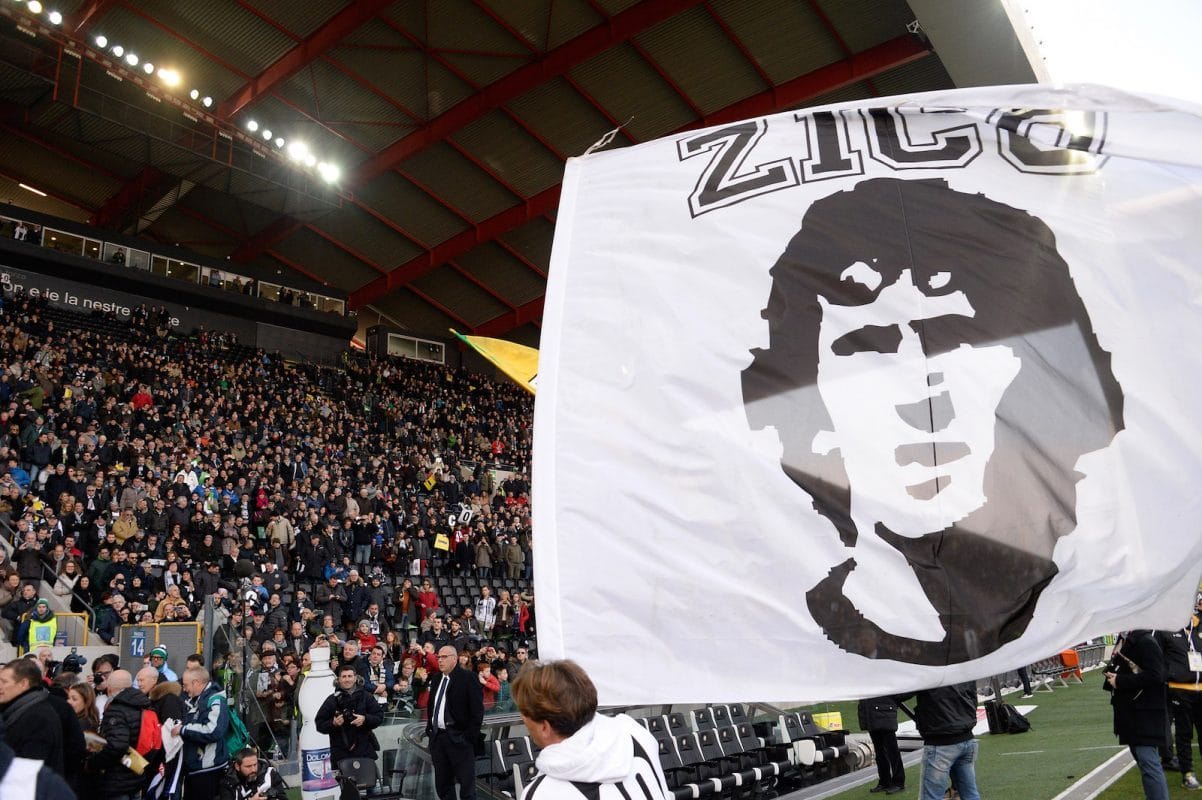 “Our coach [Tele Santana] should have looked at myself, Falcao, Cerezo and Socrates and taken one of us out. He should've brought in Paolo Isidoro to do a job on the right,” he reflected in 2014.

“Perhaps it left the lesson that the important thing is to win no matter how. If you have to kill a move, stop the game and make fouls to win, it shall be done.”

Zico would enjoy one superb season within the pragmatic confines of Italian football, scoring 24 goals in 1983-84 before returning to Flamengo in 1985.

He eventually retired from playing after three years in Japan, going on to manage at a high level.

Having left a legacy as an orchestrator of attacks, a specialist in free kicks, and a maker and taker of goals, Zico proved himself a worthy bearer of the number ten shirt in Brazilian football’s most beautiful era.

READ MORE: The greatest numbers 10s of all time