The summer of 2019 will shape Tottenham Hotspur for years to come.

Liverpool used defeat to Real Madrid in last year's Champions League final to spur them on. They went out, upgraded key areas and used the heartache from Kyiv as a platform.

It wasn't a missed opportunity. It was a blueprint on how to improve.

Mauricio Pochettino and his team need a similar mindset if they're to have a chance of repeating the heroics they showed during their 2018/19 European run in the future.

Some may feel Christian Eriksen's desire to move hinders their potential progress. If handled poorly, it could, but for a club as shrewd as Tottenham it's an opportunity. An opportunity to strengthen their squad, funded by a wantaway player and riches from a European run fans won't ever forget.

While unique in some ways, Eriksen isn't irreplaceable. Rumoured target Giovani Lo Celso adds a creativity to the Spurs midfield they otherwise lack. Tanguy Ndombele, a player who supposedly tops Pochettino's wishlist, adds dynamism to the middle of the park.

Both would be welcome additions to Pochettino's squad. However, the most intriguing link is the one claiming the club are prepared to spend £45million on Roma wonderkid Nicolò Zaniolo.

Spurs are the latest club to cast their eye over Nicoló Zaniolo.

We take a closer look at the Roma star. pic.twitter.com/1PX1nW0NML

Italian outlet Tuttosport claim Spurs and Juventus are in for the 19-year-old playmaker. While the Serie A giants usually get their pick of the bunch in the Italian league, it's difficult to see where the former Inter academy star fits in at the Allianz Stadium right now.

Spurs, on the other hand, can offer him a starring role from the off, especially if Eriksen does depart.

You see, the Dane's decision to move on couldn't have come at a better time. Not prolific enough for the final third and not dynamic enough for a midfield role, he's kind of been shoehorned into the team simply because of what he can do when he fancies it.

The game has moved on meaning players like Eriksen are now defunct, to an extent. Though Zaniolo is also considered to be a playmaker, he's a goalscoring one. And he could play the role on the right, where the Spurs No.23 enjoyed his best season for the club during the 2015/16 campaign. 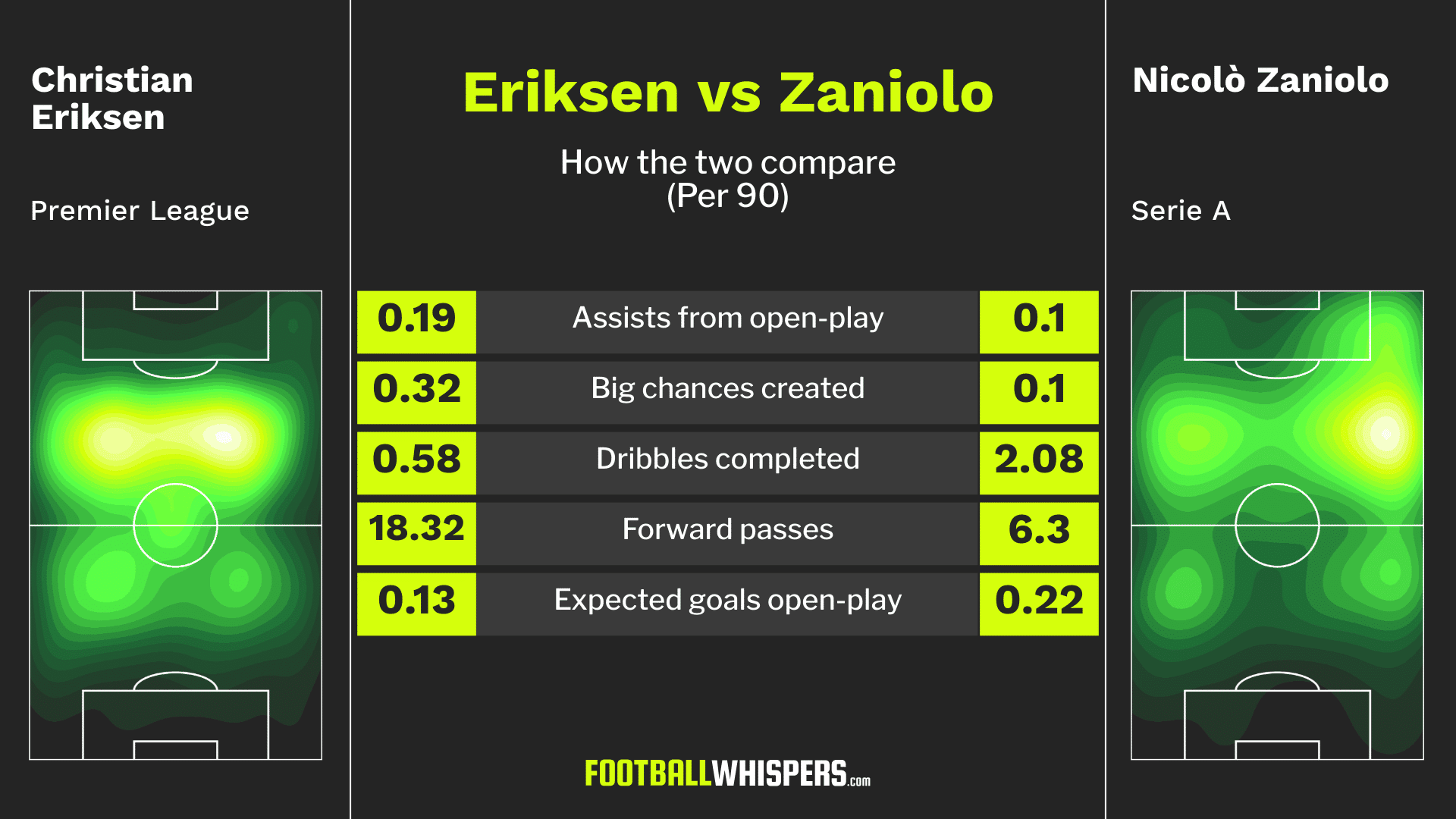 As the graphic shows above, Eriksen is more of a creator. He finished the 2018/19 season with more assists and he created more big chances on a per 90 minute basis. But in an attacking role, which Eriksen occupied, goals are the currency players are judged on these days.

In those metrics, he falls short up against his Roma counterpart. Zaniolo averaged 0.09 more expected goals from open-play per 90 last term, and that in a struggling Roma side.

He also completed more dribbles, showing just why he's so effective. With so many teams now pressing on a more regular basis, press-resistant players are integral to the way you look to combat that. The better you are in tighter spaces, the more of an impact you'll have on the game. The 19-year-old's ability to beat a man would make Spurs even more dangerous.

But it's his knack for goals that will take him far in the game.

Nowadays, the best teams have wide forwards who score more goals than the centre-forward. The variety is what makes them so difficult to stop.

Spurs have Harry Kane, Heung-min Son and Lucas Moura as goal threats. More often than not, Pochettino starts one of the latter two along with Kane, not all three.

It means a goalscorer is sacrificed to make space for Eriksen, a creator. In a way, it makes Spurs more predictable. But swapping Zaniolo in for the former Ajax man changes that dynamic completely. Pochettino's men go from having two threats to having three, with further support coming from midfield. 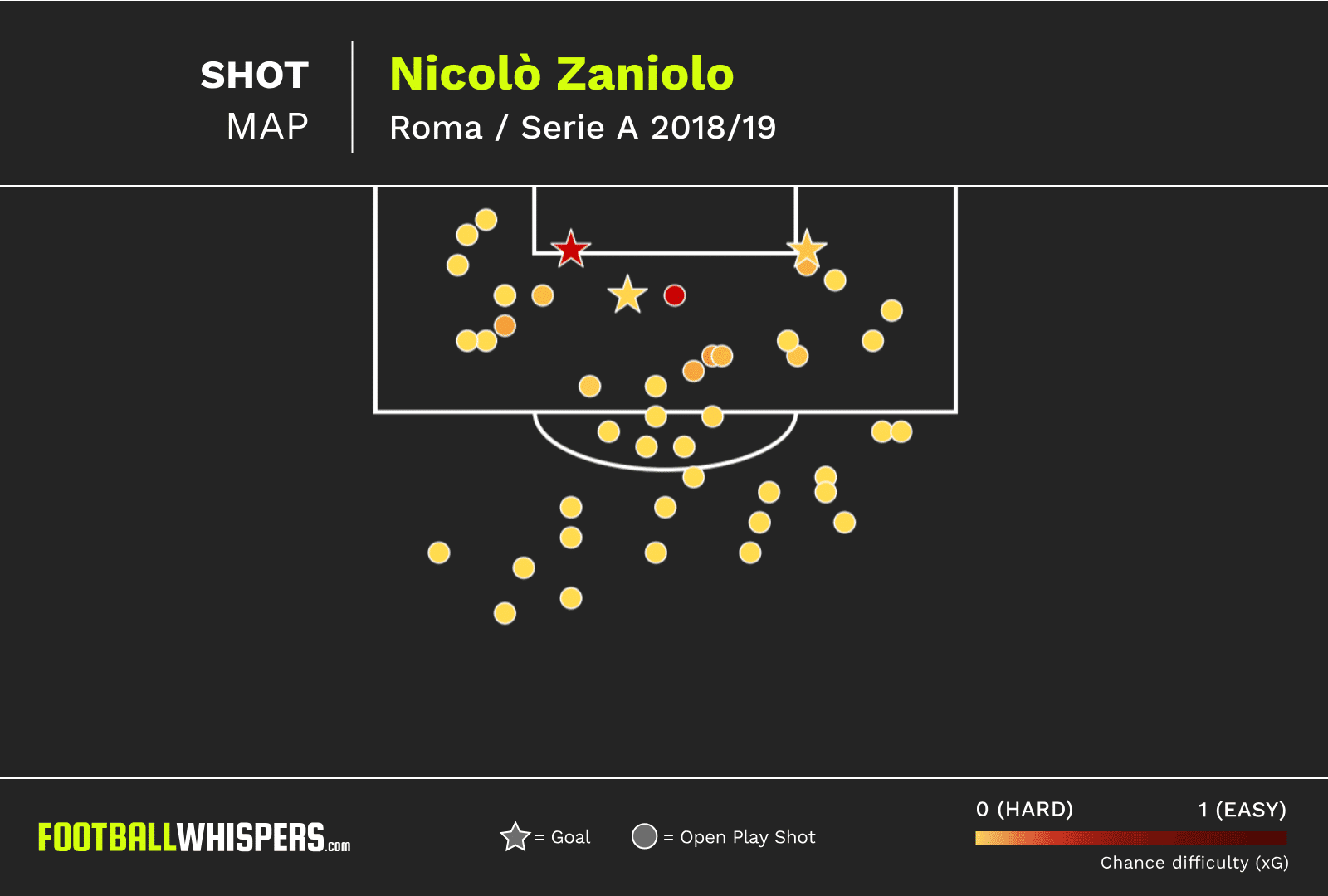 Zaniolo's open-play shot map in Serie A this season. A positive is how many he takes inside the penalty area. It shows he's getting into high-quality areas and his opportunities are ones considered repeatable. His finishing will improve with experience, no doubt, but there's a lot to work with already.

If you had to show one game to showcase what Zaniolo was all about then it would be Roma's Champions League clash with Porto. The 19-year-old was the match-winner, netting twice on the night, and his goals epitomised him as a forward.

The first was all about his composure. He brought Edin Džeko’s pass down inside the penalty area and, with his weaker right foot, he lashed the ball past the legendary Iker Casillas.

His poacher-like qualities were there for all to see when he scored his second. Džeko’s effort cannoned back off the post and Zaniolo was there, free inside the six-yard box, to tap home.

It was a simple finish but his movement prior to stroking the ball into the net was exceptional. He naturally followed the play and it's why he's destined to score goals galore throughout his career.

Lo Celso and Ndombele would be welcomed additions to the Spurs midfield. Both have the ability to unlock defences but it would be the arrival of Zaniolo that could take Spurs to the next level.