After his quotes following the FA Cup semi-final defeat to Manchester United, it appeared as though Mauricio Pochettino's time as Tottenham Hotspur manager was coming to an end.

Courted by the likes of Manchester United and Paris Saint-Germain, the Argentine tactician made a passing comment in his post-match interview to cast doubt over his future with the club.

“We are victims of our own success because we won in four years a lot of individual awards but still we need to win a collective trophy,” he said.

With me or with another. That's all it took to cause a frenzy in the media. But May isn't yet over and Pochettino has penned a new five-year deal with the club.

“I am honoured to have signed a new long-term contract as we approach one of the most significant periods in the club's history and to be the manager that will lead this team into our new world-class stadium.”

He's committed to the project and, according to the Evening Standard, Heung-min Son are set to join their boss in signing new deals to extend their stays in London.

It was no doubt part of Pochettino's demands during negotiations, to ensure Spurs tied their best players down to better contracts. It's a show of loyalty to the boss that the club are doing that.

And, if the Daily Mirror are correct, the backing won't end there.

A recent report claimed Spurs had an interest in Anthony Martial with the Manchester United forward looking to leave Old Trafford after being overlooked by José Mourinho for large parts of the 2017/18 season.

Spurs are also long-term admirers of Wilfried Zaha and there's been talk that the player might now be ready to return to a top six club. A fee of around the £50million mark has been mooted and it's a fair price given he's got a contract at Selhurst Park until 2022 and he's just had a Roy of the Rovers type season to help them move clear of the relegation zone.

It's interesting, however, when their stats for the campaign are compared. The media narrative would suggest that Zaha was in the best form of his career while Martial flopped and that's why Mourinho opted to bring in Alexis Sánchez. 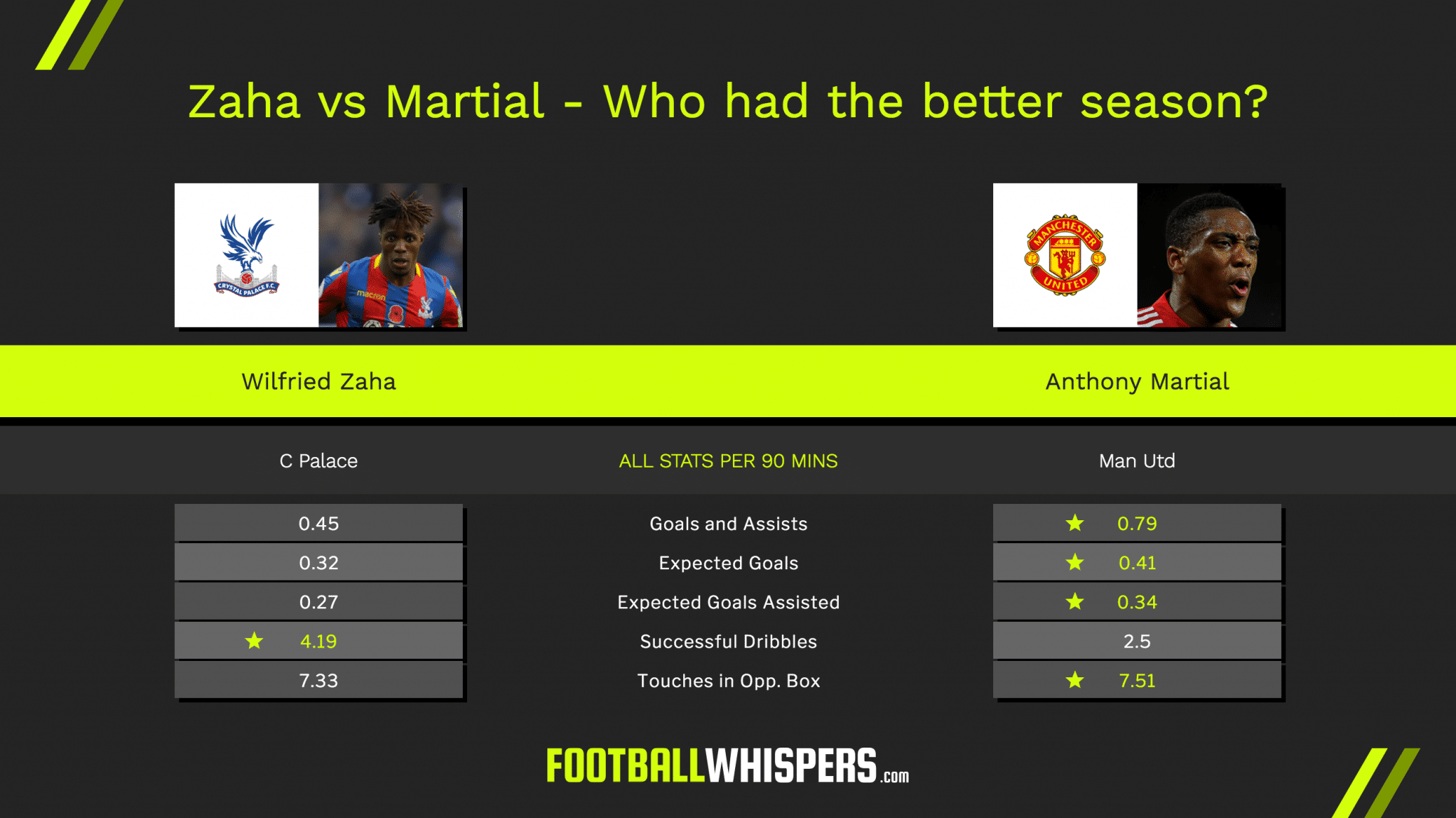 Stats rarely tell the whole story but those selected in the graphic are important ones for attacking players. It's also worth noting that Zaha played more as a striker than Martial did during the season.

The Frenchman comes out on top in the goals and assists column, as well as the expected goals and expected goals assisted categories. The 22-year-old also has slightly more touches in the oppositions penalty area – 7.51 to 7.33.

The only battle which Zaha wins is the successful dribbles one, with the Ivory Coast international completing 4.19 compared to Martial's 2.5.

If Spurs could only sign one of these two it's not really a competition. Martial, with just 12 months remaining on his deal, would be much better for value and he's more of an attacking threat in general.

He could lessen the goalscoring burden on Kane and help fire Spurs from top four hopefuls to genuine title challengers.